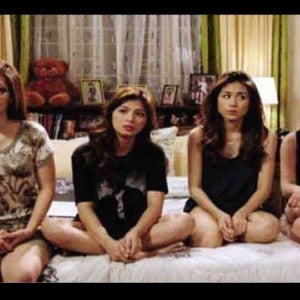 As we watch Cathy Garcia-Molina’s family “dramedy,” “Four Sisters and a Wedding,” we get emphatically caught up in its sassy, rollicking tale about siblings who pretend to get along to make their mother happy, but are actually competing for the biggest place in her heart of hearts—and their preferred corner of the sky!

The movie’s storytelling unspools so naturally that we hope that it will carry us along triumphantly all the way to its conclusion. Unfortunately, that is not to be.

The film’s major conflict revolves around the four sisters’ opposition to the impending marriage of their kid brother to a filthy-rich girl whose parents’ ostentatious lifestyle appalls them. They do everything in their power to put a stop to the “unacceptable” union—not realizing that they are far from perfect themselves!

The movie is a funny and instructive voyage of chastening self-discovery that all of the characters and the film’s viewers learn a lot from.

However, the voyage is made less smooth and focused by a number of plot points that turn out to be not as productive as intended.

The first bump in the movie’s otherwise delightfully enjoyable ride is the series of “bright” ideas the sisters think up to derail or abort the wedding.

Also an unproductive distraction is the long charades game towards the end of the film.

Finally, some of the characters take up too much screen time to detail their deepest feelings in long monologues that are dramatically cogent and moving, but retard the storytelling’s organic build and rise to its cathartic conclusion.

To be sure, the film is a particularly difficult and ambitious production for its makers to wrap their arms around, because it has so many major characters, and giving each of them his or her due “moments” was by no means an easy task.

Still, cinematic requirements of organic unity have to be lived up to, despite the difficulty involved, since they comprise the key element that assures the entire production’s effectivity and success, not just as a series of diverting scenes, but also as an integral work that packs a solid, cumulative punch that hits the viewers where they live, breathe and are most responsively human.

It is to the film’s credit that, despite its distracting and “retarding” flaws, “Four Sisters …” evinces a good measure of this artistic effectiveness and holds on to viewers’ hearts.

This is by no means a minor achievement, especially for a production that also occasionally resorts to facile “for the fans” gimmicks in order to end up as a big hit.

By far the best suit of Molina’s film is its gallery of on-target characterizations, with many members of its stellar cast coming up with insightful solo portraits that make the movie’s resident family not an unfocused mix, but a celebration of sassily idiosyncratic individuals.

Thus does the director demonstrate her unique ability to elicit relatively more truthful and revelatory portrayals from her actors, despite the “commercial” nature of their shared enterprise.

We hope that Molina’s next film will gift us with more of the same, plus more productive plotting that does away with distractions, unproductive detours and overlong “monologues,” so she can truly come into her own as a significant filmmaker.