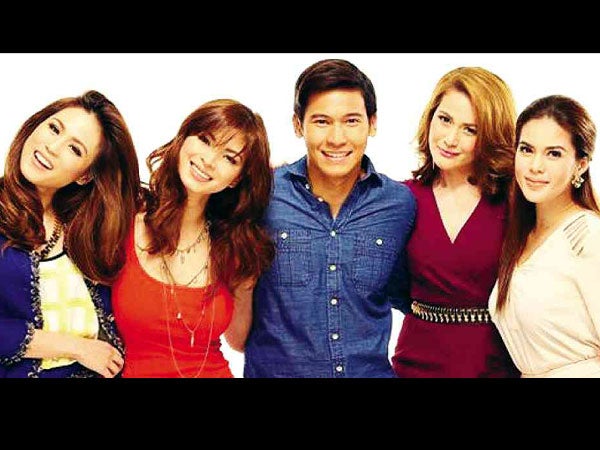 “Four sisters and A Wedding” occasionally goes off the rails when it takes protracted strides to give equal exposure to its lead actresses: Bea Alonzo, Toni Gonzaga, Shaina Magdayao and Angel Locsin. But, we have to give props to director Cathy Garcia-Molina for pulling off a high-wire balancing act without scrimping on the chatty—and catty—charms of her cinematic muses.

The feat isn’t an easy one: Molina is tasked to tell the tale of Teddie Salazar (Gonzaga) and her sisters, Bobbie (Alonzo), Alex (Locsin) and Gabbie (Magdayao), who must come together to stop the wedding of 23-year-old CJ (Enchong Dee), their only brother, to Princess (Angeline Quinto)—whose affluent family is deemed too loony for their taste. The tension escalates further when Princess’ parents (Boboy Garrovillo, Carmi Martin) ask CJ to sign a prenuptial agreement!

The movie relies heavily on this limiting and surprisingly turgid central conflict as it weaves the sisters’ back stories together: Teddie, the eldest of the supposedly overachieving brood, used to work as a teacher in Spain, until she was laid off during the global economic crunch, because she simply wasn’t good enough. She has kept her new jobs under wraps—as a waitress and housekeeper!

New York-based Bobbie is smart and foolish in equal measure. She’s successful and driven, but her careworn melancholy, fuelled by a previous traumatic breakup, prevents her from fully committing to Tristan (Sam Milby), who repeatedly asks for her hand in marriage.

Alex is the underachieving sister who moonlights as an assistant director in indie films. She used to be Bobbie’s confidant—until she fell in love with Chad (Bernard Palanca), Bobbie’s rocker ex-boyfriend! Teacher Gabbie has opted to stay home to look after their mom (Coney Reyes).

Molina juggles the complex balancing act as she executes her fizzily fresh take on sibling love and estrangement—a theme that she uses effectively as an emotional conduit for the siblings’ complementary stories.

The film takes a stronger and more excoriating tone when its protagonists’ unspoken issues come to light—but, the disparate themes give the production little time to focus on any of its conflicts. So, Bea, Angel and company end up intoning mouthfuls of monologues in extended, declarative scenes to tie up loose ends.

On point of performance, the fearless Bea comes off best as she limns Bobbie’s insecurities with sensitivity, consistency and panache—and it doesn’t hurt that she’s lovelier than ever!

Angel also does well in a focused portrayal that is devoid of ego and vanity—you can sense her stepping back when the “spotlight” is on her co-actresses. Shaina acquits herself well, although she really isn’t required to do much.

Gonzaga isn’t as textured, however, because her broader and more impish approach to characterization compromises her believability when she’s required to reveal Teddie’s vulnerable side.

She does shine in her cathartic scene with the adorable Janus del Prado, so we know that there’s more to Toni than her winkingly gleeful antics. —Indeed, a little judiciousness goes a long way!