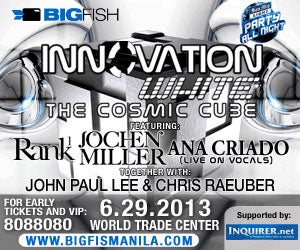 Rank1 is one of Europe’s most established and respected EDM acts, having been catapulted to stardom by their debut release, “Airwave”. They are Piet Bervoets & Benno de Goeij; a producer and DJ duo from Holland. In the 9 years that followed their break-out hit, they have continued to pack out the CD wallets of the world’s A-list spinners with “speaker-spankers” that include such songs as, “Symfo”, “Life Less Ordinary”, and “Such Is Life”.

Jochen Miller’s musical style is a crossbreed of progressive, electro, and trance; and has become popular as distinctly challenging the traditional EDM boundaries, taking countless global dance-floors by storm and conquering the biggest music festivals in Europe. His most famous tracks include, “Lost Connection”, “Humanoid”, “Brace Yourself”, and the Energy 2011 anthem, “Classified”.

Teaming up with these two big names for an exciting main performance at the event is Ana Criado. Her amazing vocal talent has earned her an important place in the EDM scene, becoming one of the most sought-after vocal acts in EDM today.

Her biggest collaborations involve artists such as Markus Schulz, W&W, Max Graham, and Armin Van Buuren (“Suddenly Summer” and “I’ll Listen”), whom she is also in a musical group with, called “Triple A” (also involving Alex M.O.R.P.H.).

Opening for these artists are Bigfish’s resident DJs, who never fail to uphold the brand’s superior standard of essential party music: flying in from Kuala Lumpur, Malaysia is John Paul “Johnboy” Lee, who has been the trusted master DJ for the past 8 years; and Chris Raeuber, who is also resident DJ at Club Haze (in The Fort Strip, Taguig). (advt)