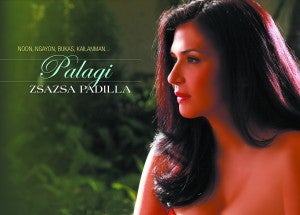 PolyEast Records proudly announces the Divine Diva’s significant return in the studio with a brand new album titled “Palagi” which will remind us once again of the gift of her voice spanning three decades of OPM power ballads.

Following the record-breaking success of her first project under PolyEast in 2009’s “Unchanging Love,” the new album features all-OPM songs, one of which ZsaZsa wrote – bringing back her signature love ballads with eight original compositions and two covers.

The album boasts the first single “Palagi” and remakes include the songs “Without You” which was originally by Joey Albert and a touching version of “Maging Sino Ka Man,” a duet with Martin Nievera and made as themesong in ABS-CBN’s hit drama series “Juan de la Cruz.”

As a true artist herself, she has once again released an extraordinarily intimate album and wrote the song “All Cried Out” which deeply evocative of her personal journey. “Palagi” is ZsaZsa’s brand new studio album in over four years, features incredible songs written and produced by an array of talented musicians including Louie Ocampo, Rey Valera, Francis Salazar, Diana Dayao-Martin, Keith Martin and PolyEast Records A&R Manager Chito Ilagan.

ZsaZsa debuted her singing career in 1983 and have sustained such a long string of hits that are landmarks in many of our lives like Hiram, Mambobola and Ikaw Lamang to name a few. With a voice that stands like monuments upon the landscape of Pinoy music for the past three decades, ZsaZsa remains on top.

ZsaZsa Padilla’s new album “Palagi” now out in stores released by PolyEast Records for only Php300.00. Special thanks to Belo Skin and ZO Health.