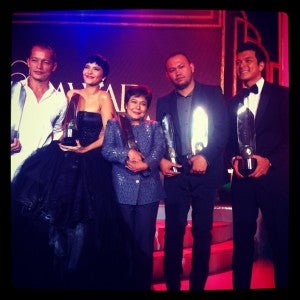 Mardoquio though failed to bring home the best director trophy.

“This is for my Mom who always supported me and allowed me to nurture my love for cinema,” said Alix in his recent status on Facebook.

The best actor went to Jericho Rosales for his work in “Alagwa,” a film by writer-director Ian Lorenons on human trafficking.

Nora Aunor, as expected, won the best actress trophy for Brillante Mendoza’s “Thy Womb.” Mendoza on the other hand won best production design for the same film.

Best Documentary award, to the delight of many, went to the enigmatic “Harana” by Benito Bautista. “Harana” tackles the nearly lost Filipino tradition of serenading ones’ love at night.

Gawad Urian is given by the Manunuri ng Pelikulang Pilipino (MPP), a group of film critics and academicians.