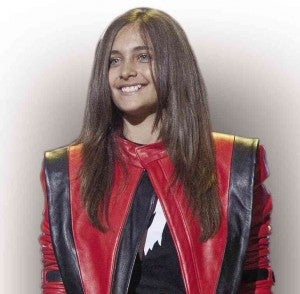 In only a couple of years, Michael Jackson’s daughter, Paris, has zoomed to the top of the stellar teen list, with “Tomorrow’s Superstar” written all over her.

Imagine her fans’ shock and dismay, therefore, when it was rumored that their fave new find with the impeccable show biz “genes” and credentials had recently tried to inflict serious damage on herself, including some decidedly dangerous gambits instigated by depression and poor self-image!

That was the shocker: Paris was on top of her generation’s show biz heap, and yet she felt more like a loser than the certified winner she was, and attempted suicide.

What a downward spiral from the instant fame she experienced when she so movingly eulogized her dearly beloved dad at his funeral!

Adding to viewers’ pain was the fact that Paris was only the latest in the lengthening list of celebrity meltdowns thus far this year, including Amanda Bynes, Demi Lovato and Paris’ male teen counterpart, Justin Bieber.

What is it about precocious stardom that makes it such a danger-strewn minefield that vulnerable youths should not be obliged to navigate?

In Paris’ case, despite Michael’s best efforts to rear his “surrogate” kids in a loving home, that turned out to be nearly impossible to achieve due to his popularity and controversy.

This generated intrusive media attention that in turn drove him to weirdly and neurotically hide his children’s identities with assorted disguises, masks and blankets.

In addition, it wasn’t only Michael who was controversial, but also the other members of his large family, a negative impression fueled by persistent rumors about physically and psychologically violative parenting, being overworked at a young age to “make hay while the sun shines”—etc!

In Paris’ case, the stress of “reflected” celebrity was made more intense by her having had to witness her father’s demise, and later being caught up in the looming battle over his fortune, plus a contentious suit filed against his “farewell” concert tour’s producers.

Clearly, it would take an unusually focused youth to “survive” all those pressures—so, news that Paris hasn’t quite made it is no surprise—albeit being a huge cause for concern.

The hope is that everybody’s concern for Paris’ recovery and future welfare will help her emerge victorious over the demons that she so precociously has to battle. While she’s still recovering, it’s important that the contentious and stressful show biz syndrome be kept far away from her.

Temporarily, too, she should be inhibited from using the news media as her personal TV network, because her videos and tweets exacerbate the global curiosity and potential notoriety that has contributed to her far from normal development as a teen talent and person.

Is this at all possible? Unless Paris herself sees the value in this, constant public attention can be habituating and even addictive—so, more decisive adult intervention should also be in order.

Trouble is, who will do the inhibiting? Her grandmother? Her birth mother? Past experience suggests that they may not be strong or focused enough to read everybody else the riot act—and to protect Paris even from herself!

So, this is a sad story that currently has no intimations of a Happy Ending anywhere in sight. Perhaps more decisive professional help and legal limitations will do the trick? Finally, don’t discount the power of prayer, which the currently embattled show biz princess is clearly in such urgent need of! Let’s pray for Paris in extremis.