In a limo with Dayanara Torres who plugs “200 Cartas” 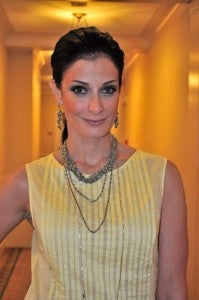 I had a thrill of a lifetime watching the preview with Dayanara, Bruno and Shimmy. And if I may add, I was in the same limo that transported the group to the AMC Theatres in Times Square. They spoke a lot of Spanish to one another but that did not make me feel excluded. They would explain what they just said and they were very warm about making me feel like I was part of the conversation.

In that aspect, at least, Dayanara was very Filipino.

“The behavior of the Puerto Ricans are very similar to Filipinos,” said Shimmy who was born and raised in New York and whose family, the Floros, owned the Crispa department store chain in the Philippines.

In the movie, Dayanara plays an independent artist in Puerto Rico who figures in an odd love triangle set in her native country. Dayanara said she got the part after sending an audition video to Bruno.

“I read the script and I fell in love with it,” she told The FilAm. “It’s fun to see our culture being presented in a comical way.”

Now based in Los Angeles, Dayanara has two children with Marc Anthony (of J Lo past, yes) two boys, age 9 and 12. She goes home to Puerto Rico at least twice a year.

Her stay in the Philippines was among the “great years of my life,” she said.

After winning the Miss Universe pageant in 2003 in Manila, she was immediately offered one movie role after another. She ended up staying in the Philippines for five and a half years.

She’s done 10 Philippines movies where she’s been paired with Gary Valenciano, who is part Puerto Rican, and Aga Muhlach. But it was Aga who stole her heart.

“We fell in love and it was perfect, although I missed home, I was so far away from home,” she said matter-of-factly.

When her contract expired, she returned to Puerto Rico to become a musical artist. “The distance between us took a toll,” she said. Then she met and married the Latin singing sensation Marc Anthony.

“I miss lumpia and sinigang na baboy,” she said.

“200 Cartas” is based on director Bruno Irizarry’s personal story. An American male meets a beautiful Puerto Rican woman in New York. It was love at first sight. Separated by circumstances, he follows her to her country, and what follows is a series of funny adventures around the island.

He then meets Yolanda (played by Dayanara), a working-class woman who works in construction wearing boots and with no makeup. The ending is as goofy as the rest of the movie.

“It’s a personal experience because when I was 17 I moved to New York, and I met this beautiful girl and I was head-over-heels for her,” he recounted. “I had to go to Puerto Rico as I could not stop thinking about her. So I decided to go back but she wasn’t there. I spent the next three years looking for her.”

It took him seven months to write the script and two years to complete the film, which also includes a great deal of animation.

The most difficult part of filming was moving around the island in the rain. There were two hurricanes, and members of the cast and crew contracted dengue fever.

“It was crazy,” he told The FilAm.

Producer Shimmy Floro McHugh, who owns a popular bar in Puerto Rico, said “200 Cartas” is a low-budget movie. McHugh is friends with the president of the Puerto Rico Film Commission who recommended the movie production to him.

“I just love the story,” he said. “It reminded me of the time when I first went back to the Philippines. The way Puerto Ricans talk and their lifestyle are very similar to Filipinos. The movie is upbeat, funny and charming.”

In urging Filipinos to go see the movie, Dayanara stressed, “Our cultures are very much alike.”