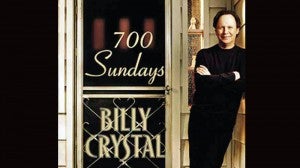 STAGE version of “700 Sundays” returns to Broadway this year. Right: The comedian as a precocious, young performer.

The passing of our dear dad months ago has shaken our world in ways we could not imagine. Being a daddy’s girl, I feel a deep sense of loss and sadness every time I realize that I will no longer see him.

Reading Billy Crystal’s book, “700 Sundays,” has provided some relief. When I got the book, I had no idea what it was about. But, since it had Hollywood’s comedian extraordinaire on the cover, I knew it would be funny. Little did I know that I would be needing the book to cheer me up!

“700 Sundays,” published in 2005 by Warner Books, is about the number of Sundays Billy spent with his dad, Jack Crystal, who died of a heart attack when the younger Crystal was only 15 years old. His dad held two jobs, so Sunday was the only day he could spend with his family. The book is based on Billy’s Tony award-winning play, which is returning to the Broadway stage later this year.

I laughed and cried as the actor recalled his life’s ups and downs—as if he were talking to me. I could imagine the audience’s reaction to its stage version! Each chapter is filled with wonderful memories. Crystal’s description of their relatives is hilarious—how “they spoke mostly Yiddish, which is a combination of German and phlegm. This is a language of coughing and spitting; until I was 11, I wore a raincoat…!”

Crystal also mentions the other members of his family who have had a big impact on his life—like his Uncle Milt, who headed Commodore Records and introduced jazz music to his young nephew.

But, Billy’s most indelible memories were the times he spent with his father. He fondly remembers how his dad taught him baseball and how, at a very young age, he was introduced to the world of comedy when his parents, Jack and Helen, took him to a live comedy show—the experience made Billy realize what he wanted to be: “I was only 9 years old, but it was clear (to me) that I was going to be a comedian! There was no confusion.”

The Crystals’ living room became Billy’s first stage, and his relatives roared with laughter as the young comic entertained them with his antics. Together with his equally talented brothers, Joel and Rip, he formed a trio that performed for their eager relatives at family gatherings.

For me, the book’s most moving chapter is when Jack Crystal passed away. It touched my heart in a very personal way as I remembered my dad’s final hours.

It moved me to tears as Billy “started having flashes of what I imagined happened to my dad, the night before . . . The images swirling together through my mind, paralyzing me with their vivid intensity . . .”

My dad also died of cardiac arrest, and although I feel fortunate for having spent more than 700 Sundays with him, I wish we had a thousand more Sundays together.