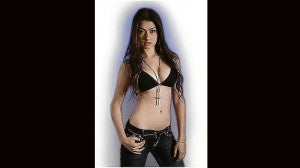 MANILA, Philippines—Brazilian model-actress-TV host Daiana Meneses confirmed on Thursday she was the one who posted photos on Instagram proving she’s a victim of domestic violence, said a report by INQUIRER Bandera columnist Regee Bonoan.

In her report, Bonoan said a source told her that the father of Meneses is coming to the Philippines to help his daughter.

She reported Meneses has plans of filing charges against her erstwhile lover, who she refused to name in the media.

In Bonoan’s report, she said there are sources who told her the lawmaker has been in a foul mood these days because he lost in the May elections.

In TV interviews on Thursday, Benaldo confirmed he’s the husband of Meneses.

In an SMS to the networks, Benaldo said he and Meneses, like ordinary couple, are undergoing a difficult phase. He said they had fights but it’s all because of love.

He said forgiveness has been given between them and they love each other.

He also made an appeal to the public to respect their privacy.

As of posting, Meneses hasn’t given any interviews regarding Benaldo’s statement.