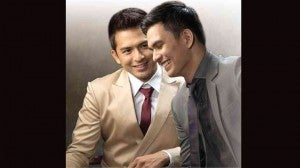 “I’m not homophobic,” declared actor Tom Rodriguez, who portrays a gay character in the latest primetime  drama series “My Husband’s Lover” on GMA7.

“In this industry, it’s impossible not to work with gay people. I have tremendous respect for them,” he told the Inquirer on Tuesday.

In “My Husband’s Lover,” Rodriguez is Vincent, husband and father, who is in love with his high-school classmate Eric (Dennis Trillo). His wife Lally (Carla Abellana) learns of the affair but does not leave Vincent.

Rodriguez said, to prepare for the project, he watched gay-themed films like “Brokeback Mountain” and “Love of Siam” and talked to people with similar stories.

“I found it very hard at first to believe that something like this could happen in real life,” he said.

His character, he said, was based on some of his makeup artist-friends.

Rodriguez, who auditioned for the role of Vincent, said he knew “it would be the most challenging role for me… I hope that, before the series ends, I’d have proven that I’m a capable actor.”

The 26-year-old admitted he was nervous doing love scenes with Trillo, 32. He attended a “sensuality workshop” with Trillo and Abellana.

“By the time we needed to do the scenes, they weren’t so difficult anymore,” Rodriguez said. He said Trillo was a good actor, humble and giving, despite numerous awards won.

Rodriguez added, “Dennis and I discussed how we could convince the audience that our characters were in love. Since Dennis had played a similar role in the past, he became the guide.”

Rodriguez was introduced to Filipino audiences at 22, when he joined the ABS-CBN reality talent search “Pinoy Big Brother: Double Up.”

He was first seen on the big screen in the hit comedy “Here Comes the Bride” (2010) and was in the 2011 remake of “Temptation Island.”

Before transferring to GMA7, he was in Kapamilya’s “Angelito: Batang Ama” and “Be Careful with My Heart.”