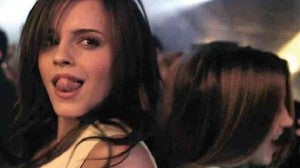 EMMA Watson would rather raid the closet of her “The Bling Ring” director Sofia Coppola, whose style she admires.

LOS ANGELES – “My jaw just dropped.” That’s how Emma Watson recalled her reaction when she first walked into Paris Hilton’s closet. Paris had allowed Emma, director Sofia Coppola and the cast and crew of “The Bling Ring” to shoot in her (Paris’) house. The film is a fictionalized version of a Vanity Fair article that recounted the exploits of a gang of suburban Los Angeles teenagers who broke into the homes of celebrities, including Paris, Lindsay Lohan and Orlando Bloom.

“I couldn’t fathom the number of shoes, that quantity of clothing,” Emma, speaking to us in a recent LA interview, added about the hotel heiress’ closet in the same home that the fashion- and celebrity-obsessed teens burglarized … six times. “It was just another world. Surely, she will never be able to wear all those shoes in one lifetime. It’s amazing; I felt like I had entered a treasure cove.”

Emma imagined “it must have been absolutely horrifying” for Paris to realize that someone had broken into her home (although Paris realized something was amiss only after the teen gang had been there several times, maybe because she has so much stuff). Emma said, “The [thought] of people going through my things makes my skin crawl.”

“Sofia had me rob a house,” Emma recounted. It was one of the ways that the young filmmaker prepared the “Harry Potter” actress for the role of Nicki, loosely based on Bling Ring member Alexis Neiers. A pole-dancing yoga instructress, Neiers was in “Pretty Wild,” a reality TV series. Also in the cast are Israel Broussard, Katie Chang, Taissa Farmiga, Claire Julien and Leslie Mann.

Emma explained that Sofia had set it up so she and her fellow actors playing the San Fernando Valley looters could go and rob this house. “I think the house belongs to Sofia’s cousins in LA,” explained the actress who is beloved as Hermione Granger in a certain hit franchise.

Sofia had arranged it in such a way that they didn’t know how to get in, Emma said. “We ended up jumping in through a window. We stole some bags. It was very funny to see how, as [individuals], we reacted differently to the scenario. I was really horrified. But Taissa was like, ‘Wait guys, we should get something from the fridge. Is anyone hungry?’ I was like, ‘This is crazy!’ It was funny, but it definitely felt very wrong and weird.”

Since she’d had that much “training,” Emma was teasingly asked where she was in Cannes at the time of a series of jewelry heists in the festival hotels. “I was working,” Emma replied, laughing. “Hopefully, I have an alibi.” 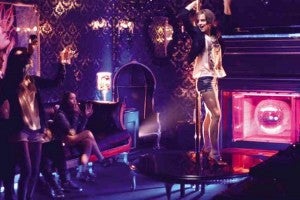 SCENE from “The Bling Ring,” where Emma’s character Nicki is a pole-dancing yoga instructress.

And, um, just a “hypothetical,” question: What would she steal if she could? “A lot of Sofia’s things,” Emma quipped. “I really admire Sofia’s style and aesthetic so … mainly her wardrobe.”

Emma was no slouch this afternoon, either, in an Antonio Berardi dress and Prada heels.

She was very careful with her own property, the actress said, unlike some of the Bling Ring celeb victims who left their front doors unlocked or left their keys under doormats (the thieves also kept track of their targets’ whereabouts online). “I do always padlock my suitcases,” Emma said. “I definitely don’t leave my house keys underneath my doormat. I have a burglar alarm, I lock my windows and doors. It’s definitely chilling to watch the film and realize that people have access to so much more information these days. They can really find out where you are at any given moment.”

Emma disclosed what she considered the most precious item in her luggage: “My teddy bear, probably. I would be really upset if that got taken. He’s very special. Actually, there are two. There’s one called Wilfred. And there’s a bunny rabbit that’s called Bunny.”

She was attracted to the crime-drama by the chance to work with Sofia, who directed “Lost in Translation,” “Marie Antoinette” and “The Virgin Suicides.”

“I find Sofia really interesting,” Emma said. “The role actually came about after we met. It wasn’t the role I was chasing; it was more Sofia. It just happened that [Nicki] is this incredibly eccentric character. I had a lot of fun doing that.”

She continued, “Sofia is really interesting because she lets people figure things out on their own. She doesn’t over-direct. She is very sparse with her comments but always right to the point and very specific. A lot of the work came … before we started shooting. Sofia had me write a diary as Nicki and I actually started a blog as Nicki. She had me do vision boards with my family [and] take pole-dancing classes.”

And there was that house-robbing exercise, of course.

Emma, who initially found her director’s shooting style “disconcerting,” continued: “When we stepped on the set, Sofia just kind of said, ‘Do whatever you feel like.’ She let us improvise. Very often, we would do two or three takes and she would be happy—which I found disconcerting because I am used to everything [being] perfect and … exactly the way it’s written in the script and doing it like 100 times, over and over. But it was very … liberating. She just really trusted me, which was lovely. We had a really nice relationship.” 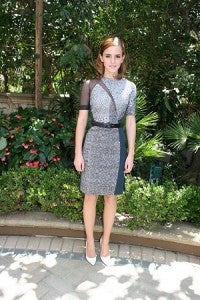 THE ACTRESS at the interview. Photo by RUBEN NEPALES

On the Bling Ring’s story as a reminder of the growing fascination with reality TV shows and instant fame, Emma commented: “It’s interesting for me because, when I was growing up, my father wouldn’t let my brother and I watch television until we were quite a bit older. So I was really cut off from this reality TV world. So yeah, it really did feel like another planet, another form of entertainment. It did feel very alien to me. It was very voyeuristic … almost like an anthropological experiment.”

The actress credited her naiveté as a young girl thrown into the media spotlight when she landed the “Harry Potter” role for helping her survive the initial brush with fame. “It happened to me so [early in life],” she remarked. “I didn’t really know what it meant. In a way, that was helpful because it meant I didn’t realize that what I said would be syndicated to hundreds of publications. I didn’t realize how people would be reading it.”

Her character in “Bling” was a different case, Emma said. “Nicki definitely knows and she definitely is very interested in [fame]. Being a notable, or a person that people know, is a very basic human need. But for someone like me, who jealously guards her privacy, it was difficult to relate to that aspect. I think Nicki just desperately wants to be loved.”

Emma clarified that she opted not to speak to any of the actual Bling Ring members “because I wanted [to have] my own interpretation of the character. It was such an absurd series of events, it didn’t even feel real. We had to play down a lot of what happened and what was said because people were not  going to believe them.”

Having made several films since the last of the huge “Potter” franchise was released, Emma said that chapter in her life seemed distant now. “I am 23,” she said. “We finished shooting [the last ‘Harry Potter’ film] four years ago. That feels like a long time ago, but I forget that it’s still very present in people’s minds. A whole new generation of kids are starting to watch the films and read the books, so it’s not going away. The other night, I sat down and I was like, I need to watch one of them and remind myself what all of that was like.”

Emma laughed when asked if she had someone to share life’s joys with. “I do have a boyfriend,” she admitted. Is he in the industry? “I couldn’t really say,” she replied, still chuckling. “It’s something that I try to keep [a secret].” Reports have identified the boyfriend as Will Adamowicz, a fellow student.

Speaking of studies, Emma is returning to Brown University this fall after a break since 2011. “I am finishing my degree; that’s one of the reasons I am still in the United States,” she said. “I think I have three classes left to take and then I will graduate.”

She enjoys living in America. “I am less of a local celebrity here, so that affords me a greater degree of freedom,” she said. “I just always felt really comfortable here.”

But she does not rule out eventually going back to the United Kingdom. “I would love to go back home at some point and do some theater,” she said.

Email the columnist at rvnepales_5585 @yahoo.com. Follow him at twitter.com/ nepalesruben.