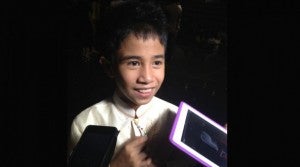 Last Saturday and Sunday, we dutifully watched the two final telecasts of the fourth season of “Pilipinas Got Talent,” to find out which act would be voted “best of the best” of six surviving finalists—and win not one but two million bucks!

When the dust cleared last Sunday night, we had our answer: Thirty percent of the final-finals’ viewer-voters had voted for juvenile singer, Roel Manlangit, 25 percent for second placer Frankendal Fabroa and his act involving a variety of hoops and wheels, and the MP3 Band settled for third place. In that cumulative verdict lie a number of instructive tales:

First, despite some jurors’ wish to the contrary, a singer has topped the tilt again, after the first season’s Jovit Baldivino, followed by Marcelito Pomoy, and the Maasinhon Trio. This indicated that, despite other acts’ determined efforts to “wow” viewers into addled amazement with a big dance corps and all sorts of visual and aural gimmicks galore, for the Filipino audience, nothing beats the “connective” and affective power of a good song, meaningful lyrics—and “birit to death”!

That last preference strikes a sadly sour note and shows just how shallow and kneejerk-impressionable some of us can be. But, the hope is that, one fine day, a local talent tilt will be won by a singer who’s so good that he or she doesn’t have to inflict terrible pain on her vocal cords and our hapless eardrums, just to win the top prize!

Young Roel’s victory was well-deserved, although we would have personally gone for the MP3 band, which was more innovative and creative.

But, our real choice for ultimate winner would have been the most unique dance act of them all, Symmetry, which had a really original concept (it was made up of five sets of lookalike twins, who “mirror-danced” in an engagingly clever and beautiful way). Alas, the great group did make it to the semifinals, but was injudiciously voted out before the final batch of six was decided on.

—Well, perhaps on reflective hindsight, the show’s viewer-voters will belatedly realize what a real champion they had in their sights—but, cluelessly failed to appreciate and value as much as the sweetly “symmetrical” act should have been!

Other notes: Since a big dance corps and gimmicks galore haven’t copped the top prize to date, next season’s hopefuls should concentrate on smaller but more meaningful and original acts that are truly unique—and perfectly realized.

As for winner Roel, his possible problem is the fact that he’s already 13, so his singing voice may change real soon. Here’s hoping that his new vocal placement will still be good enough for him to stand out, so he can continue to “deserve” his title.

More: We note with some regret that, aside from Jovit Baldivino, the tilt’s past winners haven’t really had terrific performing careers after winning the title. This indicates that the public may be initially impressed with a novelty like Pomoy’s boy-girl singing gimmick, or the “winner” may be simply lackluster, like the Maasinhon Trio.

Thus, the show and its mentors and jurors have to work harder to hone their ability to spot real standouts—and to help them develop their stellar careers after they’ve emerged victorious.

Winning is great, but becoming a genuine star loyally loved by millions—that’s the much harder part!