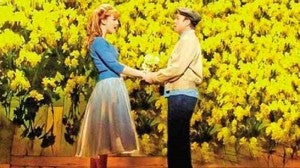 MUSICAL version of Tim Burton’s acclaimed film will debut on Broadway in September.

We were saddened by the untimely passing of Roger Ebert of the Chicago Sun-Times on the day (April 4) that we flew to the Windy City to visit our former theater colleague, Raul dela Torre. Yes, we enjoyed Pauline Kael and Andrew Sarris’ movie reviews, but it was the wit and gloves-off objectivity of the Pulitzer Prize-winning critic that truly delighted us.

Fortunately, the numerous surprises that Raul had for us kept our mind off sad thoughts—and a terrible case of sniffles: Most memorable were our lightning visits to the Pritzker Pavilion and Anish Kapoor’s humongous Cloud Gate sculpture at Millennium Park, a late screening of the Tony-winning musical, “Memphis”—and a trip to the 2,200-seat Oriental Theatre to watch the pre-Broadway engagement of the musical version of director Tim Burton’s “Big Fish,” which will open in New York in September!

In the play, the disparate elements of fantasy and reality are constantly at odds as skeptical Will Bloom (Bobby Steggert)—who’s about to marry his French fiancée, Josephine (Krystal Joy Brown)—is angered by the tall tales his father, Edward (Norbert Leo Butz), tells.

The conflict reaches a boiling point when the older Bloom begins talking about witches, mermaids and carnival creatures after Will announces his engagement.

Caught in the crossfire is Sandra (the exceptional Kate Baldwin), who’s torn between her angry son, and a husband who’s broken-hearted about his inability to reach out to his only son. She pleads with Will as she tries to defend Edward: “Each word becomes a poem/ Each sentence filled with joy/ Can’t you try to be your father’s boy?”

Unfortunately, Will has had enough of his “delusional” dad’s fairy tales. After all, how can Edward expect him to believe that his father literally became a big fish on the day that Will was born—?

Author Daniel Wallace’s fantasticating fable is a perfect fit for the musical-theater medium, because the father-and-son conflict that drives its story is set against a storybook-like narrative inhabited by a gentle giant, lady seahorses, a werewolf, a pair of conjoined twins, a love-struck maiden, and an elderly witch (Katie Thompson), who gives young Edward a vision of his future—his death!

Edward infuriates Will even more when he insists that the outlandish characters in his stories are real, and were a crucial part of his formative years—which included Edward’s stint at a magical circus and his heroic deed to stop an imminent war!

At the heart of this seemingly incredible yarn is the seldom-discussed tale of lovely Jenny, for whom Edward had planted an ocean of golden daffodils to win her heart! Has Will’s father been pining all this time for the One That Got Away? What does his loving mom have to say about this?!

Even if it lacks Burton’s looming sense of danger, the musical benefits from eye-candy sets that match the glowing choreography of director Susan Stroman (“The Producers,” “Contact”), as well as a lineup of soaring songs (“I Don’t Need A Roof,” “Time Stops,” “How It Ends”) that lovers of show tunes could add to their playlists.

The trick to musical-theater acting is to make sure that the psychological and emotional shifts between spoken lines and production numbers are seamlessly executed, to prevent the characters from merely “bursting into song”—a technical, “loose-ends” issue that needs tying up before “Big Fish’s” Broadway bow.

Another wrinkle is the unexplained intensity of Will’s anger for his secretive but otherwise fun-loving father. Subtlety and flashes of vulnerability could do wonders for a character that’s destined to take over his dad’s storytelling legacy—because he’ll be needing more than just strong conviction when it’s his turn to tell his own tall tales!