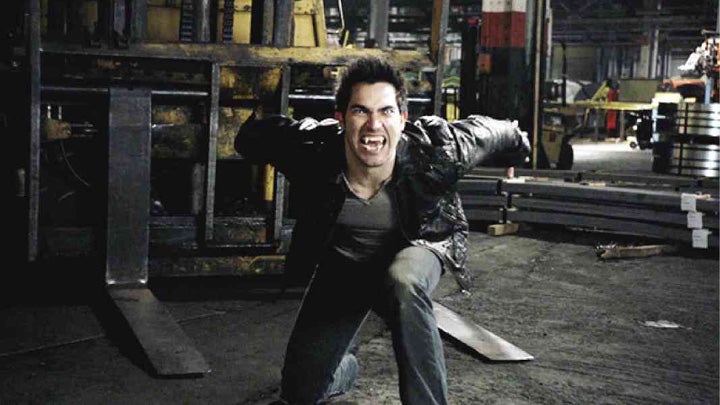 TYLER Hoechlin hints at a love angle for his character, Derek, but “can’t say much more.”

“I’ve always been a  fan of [the horror] genre,” said actor Tyler Hoechlin (heck-lin), who plays “alpha” werewolf Derek Hale in the monster drama series “Teen Wolf,” during a teleconference with Asian publications.

A former child actor, Hoechlin played Tom Hanks’ son in the 2002 film “Road to Perdition.” He had a recurring role in “7th Heaven,” and a part in the 2011 comedy “Hall Pass.” Now 25, Hoechlin is playing his “Teen Wolf” character for the third year. Tough bruiser Derek is the reluctant mentor to the main character, a.k.a. Scott, played by Tyler Posey.

“I think that everything you put together— a good storyline, good characters, something you can relate to—is always fun,” Hoechlin said, referring to monster flicks and TV shows. “Teen Wolf’s” third season, he added, would feature more new characters that viewers could connect with.

More villains
“We have more villains than we’ve had in the past, leading to a lot more action, a lot more deception,” he revealed. “There’ s going to be a lot of guessing who is who and who’s on whose side. I think, it will be fun for the audience to watch, to get to know [them]. I believe people will kind of attach themselves to the characters very quickly!”

Some fans of the show have been vocal about their support for Derek and another male character, Stiles, the goofy sidekick played by Dylan O’Brien. There is online speculation about where their oft-tense, uneasy friendship is headed. But Hoechlin is mum about the characters’ sexuality and a possible gay relationship.

“Since the first season, there’s been a positive response to the scenes that involve Derek and Stiles,” he said. “For me, it’s always been a very fun part of the show because those are the two characters on the show that are just so polar opposites of each other. I think it’s an [important] element of the show and we’re not getting rid of it at this point.”

But he hinted that Derek might still figure in a romance angle. “I think there could [be romance for Derek]. I can’t say too much,” he said, laughing.

Hoechlin’s werewolf makeup usually takes about two and a half hours to apply. Sometimes, it can be done in two, “if it’s a really good day.” He admires the effects department’s “phenomenal” job: “It’s a really cool thing to have prosthetics and makeup that you can actually see, touch and feel on set, as opposed to those that are just added afterwards, on the computer. It definitely helps me on the set… you feel very free to do things that, otherwise, you may feel a little bit awkward doing!”

The show, developed by Jeff Davis, was loosely based on the “Teen Wolf” movie that starred Michael J. Fox in 1985. The hit series previously had 12 episodes per season, but the current season has been expanded to 24 episodes.

Hoechlin is thrilled about the expansion and the addition of new actors: “They are all a blast to work with, really great people. We’ve been insanely lucky on the show to have good people to work with every time we bring out new characters. I think it will be an exciting season!”

This month, veteran traveler Drew Arellano goes on road trips to destinations no more than three to four hours from Metro Manila.

In tonight’s episode, he visits eight towns in Pangasinan and samples the best treats from the province. He starts in his mother’s hometown, Rosales, and ends in Lingayen and Alaminos, famous for the World War II memorial park and Hundred Islands, respectively.