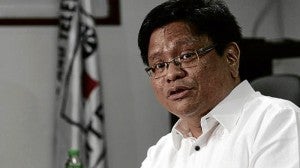 MANILA, Philippines—The Movie and Television Review and Classification Board (MTRCB) has set separate conferences with the three major television networks in June to discuss “the migration of comedy bar humor to television.”

In an interview with ABS-CBN’s early morning news and talk program “Umagang Kay Ganda” on Thursday, MTRCB chair Eugenio Villareal described “comedy bar humor” as based on “put-downs” and “green jokes,” which may not be appropriate for young viewers.

“There are types of entertainment that shouldn’t be seen or heard by kids. We have many industry colleagues who migrated from comedy bars to noontime or variety shows,” he pointed out, adding that the board sees the issue from a parent’s point of view.

Villareal added that it’s imperative for the board to remind TV networks, producers and artists that there are existing laws protecting women, the disabled and other sectors.

In an SMS sent to the Inquirer, Villareal said that “the balancing of free expression and creativity, and age-appropriate entertainment and audience sensitivity shall be addressed.”

He added: “Self-regulatory measures shall also be considered.”

ABS-CBN corporate communications head Bong Osorio told the Inquirer by phone that the network will meet with the MTRCB on June 3, to likewise tackle pertinent guidelines regarding the possible exhibition on free television comic Jose Marie Viceral or Vice Ganda’s controversial May 17 concert at the Smart Arantea Coliseum, which featured the so-called “comedy bar humor.”

“A decision on whether to air the concert hasn’t been made. The discussion MTRCB is most likely a preemptive measure,” Osorio said. “However, if the network does decide to air the concert, then of course it would have to go through the MTRCB.”

Villareal elaborated: “When concerts are taped with intention of airing them as television specials, they should be submitted for review.”

Osorio said the network sees the coming meeting as a venue “for clarification and learning purposes.” “It will be a healthy exchange of ideas on how to address the issue,” he said.

The MTRCB is also set to meet GMA 7 and TV5 in June.