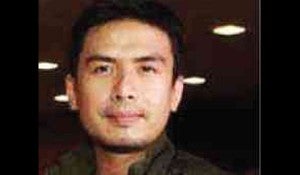 “ACTING is not my core strength, but it’s something that I want to develop.”

Having just debuted on March 24 in GMA 7’s “Party Pilipinas,” new Kapuso contract artist Christian Bautista was “shocked and sad” when he learned that his stint on the Sunday variety show was going to be brief.

But Bautista, who has been in the industry for more than 10 years, knows that, in show biz, one should be able to roll with the punches and bounce back.

“We just have to accept what happened and trust our bosses’ decisions. I turn to God for strength and direction,” Bautista said at the recent Kapuso Weekend in Boracay where he and fellow GMA 7 talents participated in beach games and treated the crowd to a variety show.

“There are things that are out of your control; you just have to move on… Maybe there’s something better coming,” he added.

Having been part of “ASAP” in a rival network for about nine years, did he feel a little weird joining “Party P?”

Bautista said he did not really feel strange “because this was my decision. I was ready for this fresh change in my career and life.”

But he said he missed his fellow stars in “ASAP,” having built a strong bond with them.

Asked if he would be in the still untitled replacement of “Party P,” Bautista said he did not know. “Of course I want to be in it,” he said, but whatever the new show might be, the biggest challenge would be to give the audience something fresh.

“It’s not about competition or trying to topple ‘ASAP’; it’s about performing well,” he stressed.

Even if he is not in the new Sunday show, Bautista can take consolation in the fact that he is one of the leading men in GMA 7’s coming soap opera “With a Smile,” which will also feature Andrea Torres and Mikael Daez.

“I missed acting on TV. It’s something that I really wanted to try again. I do musical plays here and there. But TV is a lot different—you get closer to viewers at home,” said the 31-year-old balladeer whose last television project was “Kampanerang Kuba” in 2005.

Used to playing supporting roles, Bautista was excited and overwhelmed by the shift in gear. “Ganito pala maging leading man. You’re in almost every scene!”

Bautista said he had also been trying to know Torres a bit more to build good rapport. “You have to take care of your leading lady on and off the set. You have to have a connection because, on TV, you and your partner are acting as one soul,” he explained.

Doing a TV series is grueling schedule-wise. Bautista said he would have to cut down on his singing engagements.

“The big challenge here is doing acting and not losing my singing voice,” he said. “I have to be more selective and balance in everything so I won’t get burned out.”

But he stressed that music would remain his passion and he would continue to nurture his career in Southeast Asia, particularly in Indonesia.

“Acting is not my core strength, but it’s something that I want to develop. If it doesn’t happen for me, I’ll move on knowing I tried my best. There are so many good actors in the industry and I’m just happy to be given the chance.”

Meanwhile, Bautista was tightlipped about his relationship with girlfriend Carla Dunareanu, fueling speculations that the couple might be going through a rough patch.

When asked by the Inquirer how he felt about her joining show biz, Bautista politely declined to comment.