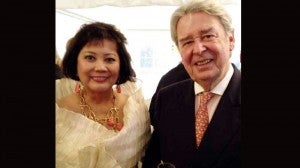 CANNES—Delegates from all over the world toasted the Philippines in a party held on Wednesday night in a tent set up beside the home of former Givenchy model Teresita “Tetta” Agustin and her French husband Dr. Christian Baverey in the très upscale Isola Bella area in this resort city in Cote d’Azur (the French Riviera).

Although it was drizzling, the party was packed and red-hot, a certified hit among cineastes.

Indeed, there was a grand reason to celebrate.

Earlier that day, trade paper The Hollywood Reporter’s Clarence Tsui pointed out: “With three new features and one restored classic this year, the Philippines has emerged as a filmmaking force to reckon with.”

Lav Diaz’s “Norte, Hangganan ng Kasaysayan” and Adolfo Alix Jr.’s “Death March” were competing in the Un Certain Regard section. Meanwhile, Erik Matti’s “On the Job” was featured in the Directors’ Fortnight.

On Thursday, Diaz and the rest of the “Norte” team, led by actors Angeli Bayani (in a Boy Domingo gown) and Archie Alemania (in a barong), received a standing ovation.

The 66th Cannes fest, which closes this Sunday, is a landmark year for the country, said Briccio Santos, chairman of the Film Development Council of the Philippines (FDCP).

There are also several Filipinos in the other sections of the world’s biggest fest: Marche du Film, Fabriques de Cinema du Monde and Short Film Corner. 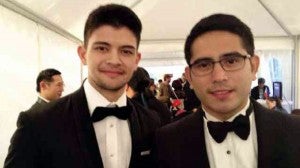 ACTORS Rayver Cruz and Gerald Anderson, representing “On the Job”

“We had guests from Egypt, South Africa, Turkey, Taiwan, Cambodia,” Santos said. “We are currently exploring co-production deals with countries that the Philippines has not worked with before like Jordan.”

“France will share technical expertise in our planned construction of the National Archive. French companies can also extend incentives to Filipinos in purchasing film equipment, for example,” Santos said.

At the event, Santos announced that next year, the FDCP hopes to set up a Philippine pavilion—which is considerably bigger than its present booth at the Film Market.

Santos added that the FDCP plans to set up a “short film cubicle” in next year’s Philippine pavilion. “It will be a 10-seater that shows short films on a media player.”

The pavilion, Santos explained, “will strengthen our presence in the international scene.”

His announcement was greeted by cheers from guests which included Pierre Rissient, the man credited for bringing Brocka to Cannes in 1978, film fest stalwarts Roger Garcia of Hong Kong, Salvatore Leocata of Brussels, Jean-Marc Therouanne of Vesoul, Sabrina Baracetti of Udine, among others.

Wine and food flowed freely at the bash. 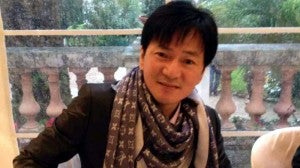 FDCP also handed out certificates of appreciation to the Bavereys, honorary consul to Monaco Patricia Zobel de Ayala and the Cedo-Villones family for welcoming the Filipinos to Cannes this year.

Loremi Cedo-Villones and her family have been opening their flat to Filipino participants in Cannes since 2009.

Cannes-based Filipinos performed folk dances to the delight of the members of the Philippine contingent, led by Diaz, Alemania and Bayani, among others.

“On the Job” was represented by actors Gerald Anderson and Rayver Cruz. Anderson also met up with filmmaker Tikoy Aguiluz, director of the actor’s coming movie “El Brujo,” in what the Bavereys described as the fest’s “splashiest” party.