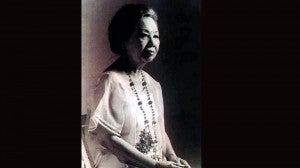 We mourn the passing of our “mother” in the theater, Daisy Avellana, and commiserate with the members of her wonderful family. Daisy and her husband, Bert, were “artistic parents” to us, not just helping us develop our thespic ability, but also genuinely caring for us and warning us about the many dangers in the theater trade—!

We also thought the world of their children, and regarded Mari as the best actor of our generation.

Some months ago, we tried to arrange for a “conversation” with Daisy, but it was not to be, and some things will just have to be left unsaid—for now.

But, we will continue to treasure the little notes that Daisy sent us through the years, beautiful “nothings” that turn out to be everything as we read them again, in sadness, tranquility and gratitude.

Another sad leavetaking last week was that of the character actress, Bella Flores, at age 84. Only a few weeks ago, we wrote about Bella’s medical crises and urged the staging of a retrospective of some of her most significant portrayals, led by her pivotal villain role in the important ’50s production, “Roberta,” starring child star Tessie Agana. —All the more reason now for that key recollection to be realized!

Another veteran star, Nora Aunor, is still very much with us, and the significant news is that she’s just turned 60. “Little” Nora Aunor as a senior citizen? That’s a new paradigm shift that may not be all that easy for her loyal fans to manage!

For her part, we hope that the mature “milestone” will motivate her to focus more intensely on her career, and on her further growth as an artist.

Her latest comeback has been partially successful, but the unfocused conclusion of her recently ended TV5 teleserye was a downer that she should swiftly bounce back from, and compensate for.

Specifically, Nora should set as her “birthday goal” the immediate surgical restoration of her golden singing voice, so she can once more become our national Ibong Adarna starting with this new “chapter” in her stellarly colorful and eventful public and private life!

On the international scene, the top stellar newsmaker is Angelina Jolie, who has undergone a “preventive” double mastectomy to reduce her high risk for cancer. The “breaking news” announcement has shocked viewers, but it’s also made many of them think about their own options in obviating or battling the dreaded disease.

Also a headline maker, in a decidedly different way, is former young star, Miley Cyrus, who has transformed her performing image so thoroughly that she recently topped Maxim magazine’s list of 100 “hottest” female personalities!

From Disney to getting Maxim-ized is quite a trip and twist, so Miley deserves all the attention she’s currently getting.

More downbeat is the news that the late, great Michael Jackson’s travails aren’t over. Not only is the case related to damages due to his untimely death proceeding apace, but Wayne Robson, who was linked to him years ago, has averred that Jackson did indeed make advances on him from age 7 to 14.

Finally, don’t miss the screening of Akira Kurosawa’s visual cinematic and artistic feast, “Dreams,” on May 26 on the Blink channel. It’s been over a decade since we last viewed it, but Kurosawa’s indelibly memorable images have been lovingly remembered through the years.