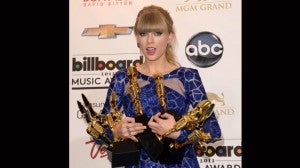 Taylor Swift poses in the press room with presented Billboard awards during the 2013 Billboard Music Awards at the MGM Grand Garden Arena on May 19, 2013 in Las Vegas, Nevada. Jason Merritt/Getty Images/AFP

LAS VEGAS, Nevada – Another day, another domination for Taylor Swift: She was the red hot winner at the Billboard Music Awards.

Swift won eight of 11 awards, including top artist and top Billboard 200 album for “Red.” She told the crowd: “You are the longest and best relationship I ever had.”

She also had a colorful performance of her hit “22” — starting backstage and working her way to the main stage on the back of a bike with help from a dozen background dancers and a flurry of red balloons.

Justin Bieber also performed — twice — and was also a multiple winner with three awards, including top male artist, social artist and the fan-voted milestone award, beating out Swift and Bruno Mars. When accepting the latter — where boos were heard — he alluded to the tumultuous weeks he’s had in the public eye.

“I’m 19 years old; I think I’m doing a pretty good job. And basically from my heart I really just want to say it should really be about the music, it should be about the craft that I’m making. This is not a gimmick,” he said. “I’m an artist and I should be taken seriously and all this other bull should not be spoken.”

Bieber performed with will.i.am and solo when he sang “Take You” in leather pants, a leather vest and a black shirt that had one sleeve, as blue laser lights beamed.

Miguel, too, had a show-stopping performance, though he seemed to kick a fan when he jumped over the crowd while singing his hit “Adorn.” The R&B singer seemed to have landed part of his body on one woman, who walked away, and kicked another, who held her head low.

Maroon 5 and fun. were also nominated for 11 awards and walked away with one win each in pre-telecast announcements. Gotye and Rihanna had the second-most wins with four awards each.

But the awards show, airing live from MGM Grand Garden Arena in Las Vegas on ABC, is less about the trophies — which reflect success on the Billboard charts — and more about the performances. Selena Gomez sang her seductive new hit, “Come & Get It,” while Chris Brown danced around the stage to his latest single, “Fine China,” though his voice began to crack during the performance. Duo Macklemore & Ryan Lewis also performed their massive hit, “Thrift Shop,” which won top rap song.

Mars and his band kicked off the show in silky red suits that matched their silky dance moves, with bright gold disco balls hanging above them during a performance of the upbeat and old-school flavored “Treasure.”

“I definitely did not expect this one,” she said, wearing a bright red dress.

She performed “High School” with Lil Wayne and gave the rapper a provocative lap dance onstage.

Prince, who received the icon award, closed the awards show with a melody of his jams in a turquoise and purple ensemble. He sang, dance and rocked on the guitar.

“Thank you for supporting me for three decades. Without you I truly wouldn’t be here,” she said.

Pitbull made two appearances, one with Jennifer Lopez and another with Christina Aguilera. His hit with Aguilera, “Feel This Moment,” samples A-Ha’s “Take On Me” and Morten Harket came out to sing a line from the song.

Comedian-actor Tracy Morgan was the show’s host, and he dressed as Psy in a bright yellow suit when the rapper-singer was onstage to present an award. They had a dance battle to Psy’s new single, “Gentleman.”