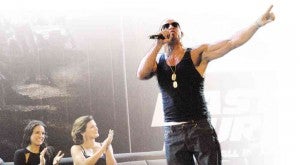 FOR ACTOR Vin Diesel, being a father is life-changing.

Although projecting the image of a tough guy in his movies, the 45-year-old actor admitted that being with his two kids with partner Mexican model Paloma Jimenez had turned him into a softie “so quickly.”

“Becoming a father was life-changing. I waited a long time [to become one] because this industry is so demanding. If you want to be the biggest star in the world, you have to be very selfish at times. Sometimes, you have to be a little late at starting a family,” the actor said during a media conference for the latest installment of the “Fast and Furious” franchise.

His twin brother Paul is married to a Filipino.

When Diesel appeared recently on the British  “The Jonathan Ross Show,” he spoke of the difficulty of working abroad and being away from his kids. The “Fast 6” production team worked in London for six months. They also shot in key cities in Japan and Spain.

“I tried to come over here (London) without them and after two weeks, it was too painful. We got a house right next to Yoko (Ono). It was very nice,” he told Ross. While on the show, Diesel even shot a video of himself telling his daughter where he was and what he was doing. 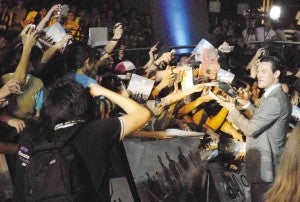 BRITISH actor Luke Evans says he dreams of flying to Boracay Island in Aklan to relax.

“My daughter is my queen,” he told reporters at the press conference in Makati City on Thursday. “She’s everything to me to the point that if I don’t send her a video of where or what Daddy is doing, even if I was on a talk show, I’d get in trouble.”

Diesel pointed out that the (“Fast and Furious”) saga was “so strongly about family that it seeps into your real life. It does affect you.” Diesel added that director Justin Lin had his son “after he saw that I could actually be a father. It’s beautiful to see the kids of the next generation come together. Tyrese (Gibson, another cast member) would sometimes have his kids on the set.”

Aside from his children, Diesel is proud to be part of a franchise he called “the most progressive force in Hollywood.” He explained: “We’re doing something beyond the spectrum of incredible action sequence—and that’s heart and family.” 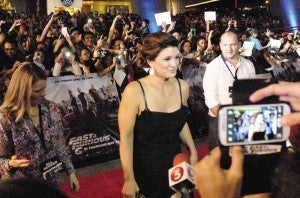 The American actor said  “Fast and Furious” was the “first multicultural franchise of its kind.” He credited its producer, Universal Pictures, for consciously doing so.

“This isn’t how it’s normally done in Hollywood. There, you don’t normally have a brotherhood between Dominic (who is American) and Han (a Japanese); or Brian and Roman (an African-American).”

Producer Universal Pictures was expected to do three more sequels, Diesel said, who is also a coproducer. “I’m all about the purity of the work, of the quality of the film,” he explained. “If I didn’t think we could do another good one, if I didn’t think there’s still room to grow, I wouldn’t push through with it. I’m the type of person who just wants to reach higher.”

He also talked of a plan to shoot a car chase sequence on the historic Great Wall of China. “It would be up to the public and their appreciation of the movie to see us through.”

Diesel admitted to finding it difficult to make several movies at a time. The sequel to his sci-fi flick “The Chronicles of Riddick” is also expected to be released this year. “I tend to lose myself in them. (Actor) Renee Zellweger once said this occupation did not enhance your life, it replaced it. I always thought there was so much truth to that. If you get into a character too deep, you put a hole in your life as you live out the character’s life.”

Diesel, Rodriguez, Evans and Carano were in Manila for a three-day promo blitz organized by distributor United International Pictures (UIP), through Solar Entertainment Corporation. A highly successful red-carpet premiere, hosted by GBX, was held at the SM MOA Music Hall on May 15. Hundreds of fans attended the meet-and-greet event the following day at the Glorietta Mall.

“Fast and Furious 6” will be shown in theaters nationwide starting May 24.