Dwein Baltazar was at first afraid of hiring a non-actor for the lead role
By: Bayani San Diego Jr.
Philippine Daily Inquirer / 10:53 PM May 19, 2013 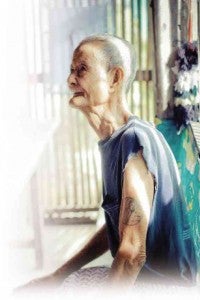 GERRY Adeva passed away a few days after the film’s premiere.

Debuting filmmaker Dwein Baltazar set out to take an unflinching look at growing old. She said her father had led her to the idea behind her first film, “Mamay Umeng,” one of the entries in last year’s Cinema One Originals fest.

“My father told me the story of his godmother, who lived a very long life,” Baltazar recalled. “When people complimented her on her age, she told them that it was more of a curse than a blessing.” It was painful, the godmother said, “to watch your loved ones die ahead of you and feel your body growing weaker with each passing day.”

Baltazar felt strongly about telling the grizzled godmother’s story. “We have a tendency to romanticize long lives. We don’t see that it can be hard, sad and frustrating. My dad’s godmother made me realize that the length of our stay on earth doesn’t matter much in the end. What’s important is to live a meaningful life.”

A former secretary in Malacañang and stylist for movies (like Chito Roño’s “Emir”), Baltazar kept writing and joining contests until she won a grant from Cinema One last year with her script for “Mamay Umeng.”

Looking back, she considered casting as the toughest part of the process. “I was afraid of hiring a non-actor for the lead role,” she related. To find the main protagonist, a senior citizen who wanted to confront death on his own terms, she searched high and low. “We had a series of auditions in Manila and Batangas City.”

She met Gerry Adeva in the Batangas tryouts and knew she had found her hero. “Lolo Gerry was a poet and photojournalist in his prime,” Baltazar said. “He understood acting and framing. It was easy working with him.”

The old man was the opposite of his onscreen character, she said. “He had a youthful aura. During breaks, he shared with us beautiful poems on life and love. It was very inspiring.”

Several days after the film’s premiere, however, Lolo Gerry  passed away at age 84. “I will forever remember the smile on Lolo Gerry’s face as he watched himself on the big screen,” Baltazar said.

Just as impressed were the jurors of the 14th Jeonju International Film Festival in South Korea, where “Mamay Umeng” tied for the Woosuk Prize, or the best film award, with Japanese director Masato Ozawa’s “Remiges.”

“To be selected to represent our country in Jeonju was a big win for us already,” said Baltazar. “The award is icing on the cake, but we’re happy and thankful for our first win.” The honor came with a cash prize of $5,000.

France’s Eve Deboise, director of the grand prize winner “Lost Paradise,” told Baltazar that “Mamay” had “hit her heart.” The Filipino filmmaker said, “I’m a fan of French cinema and to hear it from a fellow filmmaker was really something.” 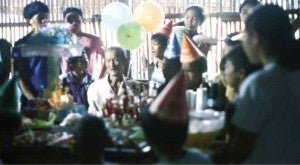 “MAMAY Umeng” tackles the sadness, hardships and frustrations of living a long life which, the filmmaker says, is often romanticized.

The audience asked interesting questions during the post-screening Q&As, she reported. “Questions ranged from the personal to the cultural and the technical. A Korean viewer asked why there was an imahen of the Virgin Mary in the film. I realized how different we were culturally. I also noticed that foreigners paid close attention to details. They really took time to understand the film.”

Baltazar hopes that “Mamay Umeng” will go places after Korea. “We hope it will be seen not only in Jeonju, but in other parts of the world, too,” she said. “We already sent screeners to other fests.”