Paraluman and other ‘singular’ screen wonders

In a recent article, we cited the movies of Paraluman, and were pleased to get unusually good feedback from our readers who wanted to know more about the classic beauty and movie star, who was partnered by  some of the top male leads of the ’40s and ’50s, including Rogelio dela Rosa and Fernando Poe Sr. Happy to oblige:

She was born Sigrid Von Giese in 1923, and was a major contract star of Sampaguita Pictures. Her unusually “perfect” beauty resulted in her being given the screen name, Paraluman, which means “muse” or the epitome of loveliness.

How did she get into the movies? A sister of Corazon Noble recommended her to top producer Luis Nolasco, who introduced her to the moviegoing public in “Flores de Mayo” (1940).

Initially, her screen name was Mina de Gracia, but Fernando Poe Sr. changed it to Paraluman when he made her a full-fledged star in his movie studio’s “Paraluman” (1941). Paraluman’s daughter is Baby O’Brien, and her granddaughter is Rina Reyes.

Other readers were intrigued by Paraluman’s being a “one-name” star, and wanted to know about other screen luminaries who are so popular that they need only one name to be recognized. 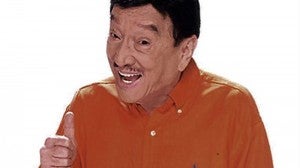 Well, starting with the most obvious, there’s Dolphy (Rodolfo Quizon), our departed King Comic. His rival for some years, Chiquito (Augusto Pangan), also went by only a single  moniker.

Other local comedians also went by a single screen name, like Bentot (Arturo Medina) and Canuplin (Canuto Francia), dubbed the Charlie Chaplin of the Philippines. Then, there were Cachupoy, Chichay, Palito, Pugo and Tugo, Babalu, Babalina, Aruray—etc.!

Interestingly, other one-name local screen comics have been of the midget sort: Weng-Weng was possibly world cinema’s only pint-sized “action” star, and even gained a cult following abroad. And Mahal was similarly wee and funny, but has not been heard from in quite a while.

Other “brand name” comedians include Chokoleit and, currently the most popular gay comic of them all, Vice Ganda!

On the international entertainment scene, movie stars who go by only one name aren’t as easy to come by. The first to come to mind is Cantinflas, the Mexican comedian who broke into Hollywood filmmaking only with “Around the World in 80 Days.” Then there’s the classic beauty, Capucine—but, the former model’s acting career didn’t last all that long either.

Then, of course, there’s Cher, and Bono and other singing stars like Bjork and Beyoncé and Basia, plus rapper Coolio and Akrobatik, and sports heroes like Pele and Adriano. —Hey, going by a singular “brand name” is turning out to be the way to go!