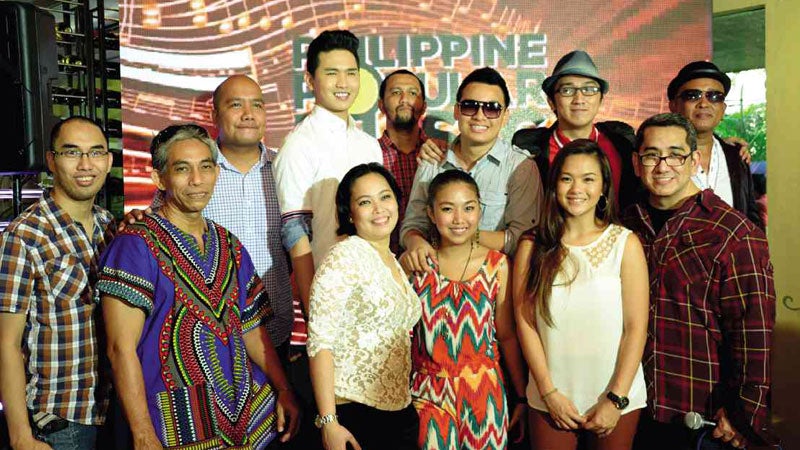 “We want to put the spotlight on Philippine music, and hopefully, spark a new movement that will be recognized worldwide,” Cayabyab, Philpop Music Fest Foundation executive director, told the Inquirer in a recent interview.

How does one embark on such an ambitious and daunting task? Cayabyab believes that among the first steps is discovering new blood, a breed of songwriters in tune with the ever-changing music scene.

So, while this year’s 12 finalists include stalwarts like Joey Ayala and veteran mainstream composers such as Jungee Marcelo, Cayabyab was very pleased that less experienced twentysomethings Myrus Apacible, Lara Maigue, Raffy Calicdan and the tandem of Thyro Alfaro and Yumi Lacsamana made it to the lineup, which he described as musically diverse.

“These kids’ experiences are fresh and unique. They’re into new music trends that older composers like us can’t easily get or keep up with,” he said.

Marion Aunor, third-placer in this year’s Himig Handog tilt, would have been one of the 12, but backed out due to “personal reasons.”

Cayabyab explained: “We opened the contest to everyone because we wanted to have a collection that encompassed different genres. As long as the songs aren’t published, performed before a live audience or uploaded on the Internet, they were good to join.”

Asked if the younger finalists were at a disadvantage against seasoned counterparts, Cayabyab said: “There are lots of big names who didn’t make the cut. That’s a testament to the skills of our younger finalists.”

He added: “It’s all about the songs. I hope other young, aspiring songwriters get encouraged to join after seeing that they can go toe-to-toe with the masters if their works are really good.”

Around 140 adjudicators composed of record label executives, singers, musicians, artists and other industry professionals narrowed down the number to the final 12. Unlike previous years, Cayabyab scrapped all the ambiguous criteria in judging the entries, such as determining which song would be a potential hit.

“I’ve realized that it was unnecessary because none of us really knows what song will become a hit since there are lots of factors involved in that. We never know what the people want at any given time,” Cayabyab explained, adding that he simply asked the adjudicators this time around to choose songs “that communicate and affect them.”

Discovering new songs is just half the battle won, Cayabyab insisted. The tough part is making the songs heard by the public. “We rely on the machinery and connections of our sponsors, TV5 and Universal Records, who will produce the compilation album,” he said.