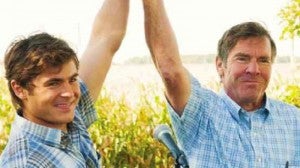 EFRON AND QUAID. Struggle to rise above their frailties in “At Any Price.”

Dean’s troubles begin when his much-preferred older brother, Grant, chooses to climb Mount Aconcagua, the highest peak in the Andes mountain range, instead of helping his father run his financially strapped 3,700-acre farm. Henry sees Dean as the next best “option,” but the latter would rather race cars than raise corn!

Henry is neither a brilliant businessman nor an ideal husband (he keeps a mistress)—so, when his extramarital indiscretions and questionable business practices come under fire and earn the ire of his disapproving father, he turns to his distracted son for help. Worse, his influential rival, Jim Johnson (Clancy Brown), is driving his clients away. It doesn’t look like Henry’s unexpected crisis is going to blow over any time soon!

As he stands to lose everything, the problematic father sees the error of his ways, but doesn’t know how to atone for his sins—because he doesn’t see Dean beyond what he wants him to be. Bahrani doesn’t just examine this complex father-son relationship, he fills his film with layers that allow its likable but flawed protagonists to tackle relevant themes—from the downside of high-tech farming to the evils of politics and big business.

Tinseltown seldom makes movies like “At Any Price” anymore—it’s engaging without being preachy, treacly or schmaltzy. The carefully calibrated drama enables Efron to veer further away from his limiting boy-next-door, sing-and-dance persona. Going off the thespic grid, his sensitive characterization proves that there’s more to him than his dreamy looks—and he passes the film’s thespic test with flying colors!

The film isn’t just a triumph for Efron and Bahrani, it’s also a moving ensemble piece that features significant turns from the subtly sinister Brown, Kim Dickens (as Efron’s supportive mom), Maika Monroe (as Cadence, his whip-smart girlfriend), and the Oscar-worthy Quaid, who delivers the best performance of his career!

Dean and the people around him inhabit a reality far removed from the hunky-dory political correctness of mainstream Hollywood—they struggle to rise above their frailties but, as it is in the real world, not every wrongdoer gets his comeuppance!