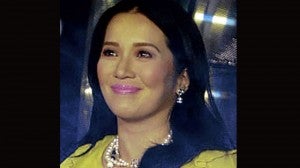 GENERAL SANTOS CITY, Philippines — Popular TV host Kris Aquino said she would first help raise the number of tourists in the country and use it as her “achievement” in case she runs for public office.

Kris, the youngest sister of President Benigno Aquino III, issued the statement on Thursday when asked about her plans in 2016.

Kris has been reported to be eyeing the vice presidency in 2016.

The TV host flew in here to campaign for the re-election of Senator Francis “Chiz” Escudero and former MTRCB chairperson Grace Poe, who are both running under Team PNoy .