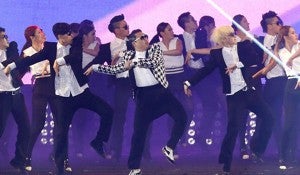 SEOUL — Psy’s new single “Gentleman” has plunged in the US hit parade as the South Korean rapper struggles to repeat the success of his global chart-topper “Gangnam Style”.

“Gentleman” dropped to 26th place in the Billboard Hot 100, updated on Wednesday, from fifth last week and 12th on its debut a fortnight ago.

The music video of Psy’s new single has been watched more than 267 million times on YouTube since it was posted on April 13, but Billboard only counts the number of views in the United States.

“Gentleman” dropped to sixth in the streaming rankings after two weeks at the top, with 4.7 million US hits, down 66 percent from the previous week. Even “Gangnam Style” ranked higher in streaming at number three.

The world has been watching to see whether “Gangnam Style” and its horse-riding dance was more than just a one-hit wonder.

Psy shrugged off the plunge in the US chart, saying that a marketing blitz had yet to kick off there.

“The promotion begins this weekend, so I don’t see it as a ‘drop in the charts’ but only the beginning. Rock on!!” he tweeted.

The video of “Gentleman” recorded 38.4 million views on April 14, destroying the previous single-day record of 31 million views set by “KONY 2012” — a documentary about a Ugandan warlord made by the charity group Invisible Children.

It was the video of “Gangnam Style,” and in particular Psy’s signature dance, that pushed him to global stardom after it was posted on YouTube and turned into a viral sensation.

A satire on the luxury lifestyle of Seoul’s upscale Gangnam district, it has become the most-watched YouTube video of all time, registering more than 1.5 billion views since it debuted in July last year.

The “Gentleman” video shows Psy, wearing his signature shades, performing his new hip-swinging dance at various locations in and around Seoul including a high-end clothing store, restaurant and a swimming pool.