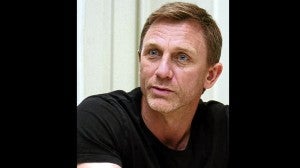 CRAIG. Being the superspy is a high-class “problem” to have. RUBEN V. NEPALES

LOS ANGELES—Daniel Craig is raring to be Agent 007 again. “We have a wonderful script, which I’m incredibly excited about, if not probably more so when I first read the ‘Casino Royale’ script,” Daniel disclosed in our recent interview with him.

For now, the much-awaited movie’s working title is “Bond 23.” “Sam Mendes is on board as director,” Daniel shared. “He’s working very hard to make everything come together with John Logan, who’s writing the script with him.”

“It has been a great break, but I’m ready to go again,” added Daniel who will costar with Judi Dench (as M) and a lineup of brilliant actors: Ralph Fiennes, Javier Bardem and Naomie Harris. He bared that filming begins in November.

Having done “Cowboys & Aliens,” which required a lot of stunts, and now, faced with the prospect of doing more in the next Bond film, Daniel was circumspect about the physical challenges of these roles.

“I’m 43 now,” said the British actor. “God knows—maybe I can keep this up for another couple of years. Then, I’m going to have to give this up, because I’ll already be too old to do this ‘jumping around and falling over’ stuff.” Wearing a short-sleeved black T-shirt that showed off his muscled arms, Daniel looked fit enough to be Ian Fleming’s beloved superspy for many more years.

“But, I enjoy the physicality of the roles,” Daniel clarified. “I always have. Even before Bond, I liked getting involved with as many stunts as possible.”

With a grin that softened the stare of his ice-blue eyes, Daniel volunteered, “I was joking the other day that the reason I got into this business is because I like pretending and falling over. I had a toy pump action Winchester when I was a kid. My friends and I used to go out to the sand dunes, and we’d pretend to shoot each other. How you rolled down the hill would score you good points. That’s why I wanted to become an actor! I’ve somehow managed to find a way into that.”

“As I grew older, I got more serious about it,” said the actor who appeared in well-received indie films before landing the plum Bond gig. “I enjoy doing theater and doing all those things—a path that has taken me down this route. I don’t seem to be able to get off it at the moment, but it’s a good place to be.”

On playing the iconic British secret agent, he said, “I’ve been lucky to land one of the best roles in movie history. If being Bond was all I did for the rest of my life, I’d be happy with that. Being Bond is a high-class ‘problem’ to have. I’ve always loved acting. Everything I’ve ever wanted to do is act.  My biggest pleasure is the collaborative process, and I’ve just lucked out!

“In the last couple of years, MGM had a problem with making the next Bond movie,” he said, referring to that studio’s financial crisis that delayed the making of “Bond 23.” The issue was resolved when Sony Pictures stepped in to cofinance and distribute the movie. “But, the delay gave me space. I got to work with Jon Favreau on ‘Cowboys & Aliens.’

“Then, (David) Fincher called me up and asked if I would like to work on ‘The Girl with the Dragon Tattoo,’” Daniel continued. “It just worked! I couldn’t be luckier. They’re very different films. I don’t think about how big the movies are, how much they cost, and what they would do to my career. I just think about if a project is worth doing, and if I should grab the chance, because who knows what’s going to happen in a couple of years’ time?”

Asked if these are good times for him on a personal level, the private man, who married actress Rachel Weisz in a secret ceremony in New York last June, answered, “It’s a pretty good time, yes. My family and friends are close by. I feel good about life, yes!”

Told that he gives the impression of a man who could live under a bridge with nothing, the rugged actor teased with a laugh, “Not anymore.”

On what his house is like, Daniel answered in general terms: “The nicest homes I’ve been into and the ones I always remember are those that seem to have an open door to people. There are centers in those homes, usually revolving around the kitchen, where there are children, family members and friends. If I were looking at an ideal home, that type would be mine!”

On whether he has gotten used to being stared at in public, Daniel  said in his self-deprecating wit, “You get used to it. Yeah, disbelief is right. As in, ‘Really, is that what he looks like?’”