(Note: We are publishing in full the reaction of Joaquin Barretto, brother of celebrity sisters Gretchen and Claudine in response to the letter of their mother, Inday, published in various media platforms) 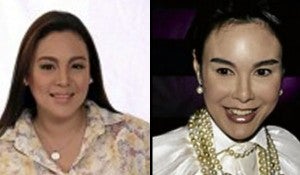 The letter of our mother which was published earlier today was appalling and hurtful and would shock anyone’s sensibilities. But what bothers me most is that while she lambasts my sister, Gretchen, to no end, and pictures her as a threat to evil personified, she seems to have forgotten the truth.

Mom, as you have gone out of your way to square off the issues that Claudine ought to answer for herself, maybe it is high time to reflect on things and address these concerns as well.

You have lifted Claudine on a pedestal as the teleserye queen and labelled Gretchen nothing but an ST queen. But who took over the role of her parents, worked at the age of 12 and gave up her education to put her siblings to school? Who put food on the table, paid for rent, electricity and hospital bills when dad suffered from his heart condition at least 3 times? Who sold the 2 acropolis lots bought with Gretchen’s earnings? Who had to shed off her clothes on the big screen so that she could afford to support her family? Did you even once stop her from doing all that because you loved her and wanted to protect her just like what you are now doing for Claudine?

We all know the truth about Claudine’s condition. Gretchen never threatened about having her “padampot”. Whatever for? May I remind you that it was you and dad who had her put in a hospital because you wanted to save her from destroying herself. Yes, Claudine is going through rough times. Again… And if you truly love her, then you should take concrete steps to save her, again, rather than lambasting Gretchen simply because she is standing up to Claudine.

You claimed that Gretchen has been calling Claudine’s children names, in her face. But how is that even possible when Gretchen had long stopped taking Claudine’s calls? Hasn’t Claudine changed her mobile number many times while still owning many prepaid sim cards as well?

On the contrary, it was Claudine who repeatedly said she was going to make an expose. On what, we were clueless. Until bashing began on instragram which is why Gretchen came to the rescue of Julia. If there is anyone who cared more for her niece, we all know it is Gretchen, as she has proven when she chose to protect me and my siblings for a long, long time. This explains exactly why as you said, we never complained about our childhood.

Please mom, let us put a stop to this. Before our family totally falls apart. While there is still something to save.