2 PH films on war, progress to compete in Cannes fest 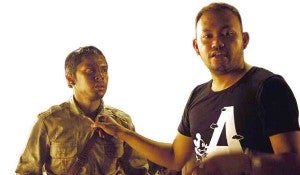 Un Certain Regard, in which the two indie directors are participating this year, aims to “showcase films of wide-ranging visions and styles” and “recognizes young talent and encourages innovative and daring works,” according to online accounts.

Diaz, famous for lengthy, introspective pieces, told the Inquirer, “It’s famous for showing art films.” His entry, “Norte, Hangganan ng Kasaysayan (Norte, The End of History),” clocks in at four hours and was filmed on location in Ilocos Norte.

Alix fielded “Death March,” which has a running time of one hour and 45 minutes and was shot completely in a studio.

It’s a Cannes debut for Diaz, who has won twice in the Orizzonti section of the Venice festival, another upper-tier gathering—in 2007 for “Death in the Land of Encantos” and in 2008 for “Melancholia.”

“Death March” is Alix’s second movie in the French fest, now on its 66th year. In 2009, “Manila,” which he codirected with Raya Martin, was shown in the Special Screenings section.

Unlike Diaz’s previous works that were in black and white, “Norte” is in color—

all the better to show off, he said, the “diverse terrain” of northern Philippines. He explained: “Ilocos is beautiful, dry, wet, lush. There are sand dunes, mountains, coastline communities as well as a bustling city.”

He first wanted to shoot in Bicol, but finally went for Ilocos Norte, specifically Brgy. La Paz in Paoay town, an area undergoing a major makeover. “It used to be an impoverished neighborhood,” said Diaz. “But it is home to a lot of Overseas Filipino Workers, and it is changing rapidly.” The film tackles the themes of progress and migration, Diaz said.

“(Ilocos Norte Gov.) Imee Marcos suggested the location,” Diaz recalled. “The local government and the residents were very cooperative during the shoot.”

The script was a collaboration between Diaz and playwright Rody Vera, who also wrote “Death March.” Vera admitted, “I’m happy and proud, but not overly so. Like Woody Allen, I tend to be anhedonic when it comes to festivals and awards.”

Alix related that the actors, despite their busy schedules, readily joined the production because of its historical theme. “For Jason, it was also very personal; his grandfather was in the real Death March.”

The film recounts how over 60,000 Filipino and American prisoners, many of them wounded, were forced by the occupying Japanese Army to walk for 128 kilometers during World War II.

“I was surprised when (Japanese actor) Jacky agreed not only to star in, but to produce, this film. He said that this movie could encourage people to talk about that tragic part of our shared history,” Alix noted.

After brainstorming with Vera, Alix decided to shoot the entire movie in a studio. “The script had a lot of surreal elements that could be achieved in a studio. The mountains, the trees, the 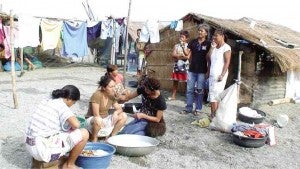 scenery were hand-painted by production designer Art Nicdao and his team.”

It’s Alix’s most audacious piece of work—a fitting finale to his trilogy on the “dementia of solitude.” He explained, “I tackled the same themes of war, loneliness and madness in my two previous films ‘Liberacion’ and ‘Kalayaan.’” He is looking forward to attending the festival from May 15 to 27.

“Cannes is always special,” Alix said. “It’s chaotic, crowded, but where else can you watch commercial flicks side by side with art-house films?” Diaz, who is currently wrapping up his film’s final cut, is undecided about traveling to France for the event.

Diaz, however, pointed out that two Filipino films in Un Certain Regard is good news for the country’s emergent cinema. “It shows the world that Filipino filmmakers are continuously experimenting, working, creating.” Alix agreed: “It’s a big deal.”

Only 50 of some 1,700 films submitted to Cannes this year will be screened during the 11-day event, according to the festival site.

Diaz and Alix were honorees in the first Inquirer Indie Bravo! Tribute in 2010.