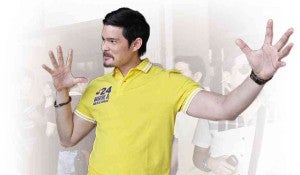 ACTOR and candidate have a common advocacy: Education.

It’s his turn to endorse former Senator Ramon “Jun” Magsaysay Jr. Actor Dingdong Dantes has declared he is backing the return-to-Senate bid of Magsaysay Jr., volunteering to campaign for free to increase awareness of the former lawyer’s platform, especially among the youth.

“May integridad, mapagka-katiwalaan, may pinatunayan. ’Yan si Senator Magsaysay Jr., my guy,” says Dantes in the new TV ad to be aired next week.

The politician and the actor shot the ad on April 17 at the Ramon Magsaysay Center along Roxas Boulevard Manila.

Dantes wore a yellow shirt with the number 24 prominently displayed on his breast pocket. Magsaysay’s official campaign color is yellow, and 24 is his number on the official ballots for the 2013 midterm senatorial elections.

Dantes is the founding chairman of YesPinoy Foundation, an organization that seeks to empower underprivileged children through education.