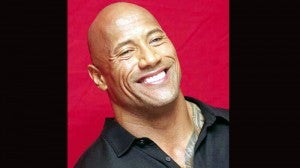 JOHNSON: “I was born to do this.” Photo by Ruben Nepales

LOS ANGELES—Just when Dwayne Johnson is about to finally realize his dream to star in a Hercules movie, a competing project comes along with “Twilight” star Kellan Lutz as the Greek god.

But that doesn’t dampen Dwayne’s enthusiasm to play the son of Zeus in “Hercules: The Thracian Wars.” In our recent interview in Miami, Dwayne said, “‘Hercules’ is something that I have been chasing and developing for over a decade. When I first got into Hollywood, one of my first thoughts was,  where is ‘Hercules’ and who’s doing it? I was in a different position at that time than I am today. But I always had ‘Hercules’ in the back of my mind. My onscreen heroes are Arnold Schwarzenegger as Conan, Harrison Ford as Indiana Jones and Hercules. Hercules is essentially the world’s first superhero.”

The former wrestling champ admitted, “I feel like I was born to play Hercules. I’m very excited. The prep has been 12 to 14 weeks with dialect coaches. We’re getting ready to go to Budapest (Hungary) to shoot for four and a half months. We’ve put together a great team.”

“I respect the mythology of Hercules to such a great deal,” said the son of an African-American wrestler Rocky Johnson and Samoan Ata Johnson. “What’s so exciting is when you’re making a film that has a foundation in a beloved mythology. We all felt that if we were going to make ‘Hercules,’ [we should] make the definitive version that would stand the test of time. Hopefully it will be the basis by which similar movies like these are going to be measured, and we could raise the bar. We’ll make it darker. We’re very familiar with Hercules and his labors. We’ll do some really interesting things. We have a phenomenal writer, a Greek (Evan Spiliotopoulos), who came on board. He’s deeply connected to the mythology of Hercules.” 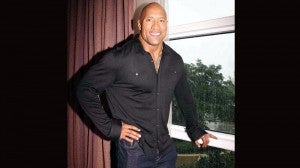 HE WATCHES his diet but loves chocolate. Photo by RUBEN NEPALES

“I wish those guys the best of luck with their movie,” he said of “Hercules 3D,” which will be directed by Renny Harlin and written by Sean Hood and Hanna Weg, and which will be shot in Sofia, Bulgaria. “We’ll make ours and the audience will decide. There’s room [for both movies].”

Kellan’s project is set to open in the United States in March 2014, with Dwayne’s version taking a July 2014 schedule.

“I’ll show you what our definitive version of Hercules will look like,” said Dwayne, who also stars with Mark Wahlberg in Michael Bay’s “Pain & Gain.” He showed a photo on his iPad of how they envision Hercules. “I’m going to look good with long hair,” he said, grinning.

A man whose humongous arms seem bigger than my two legs combined, Dwayne talked about how he deals with aging. He explained, “I found out as I got a little older—I turned 40 this year—that I train smarter, really try and understand and educate myself on supplements and what I’m eating, when I’m eating. I hired a great diet conditioning coach, who is very knowledgeable in helping me not only for these roles but even in between roles, and to understand what certain foods do and don’t do. We have wonderful holistic doctors in New Mexico who continue to do body testing and things like that.”

Dwayne revealed that he does eat whatever he craves “once a week or every two weeks. I treat myself. It’s what I call ‘Don’t cheat yourself.’ You got to treat yourself so I have pizza, brownies or whatever it is.”

“I love chocolate,” he said. “On my cheat day, my girlfriend (Lauren Hashian) makes these incredible brownies. She’ll take two brownie boxes. She’ll lay one brownie mix down, put peanut butter cookie mix in the middle and then she’ll layer another brownie on top of it, then bake that. It’s amazing.”