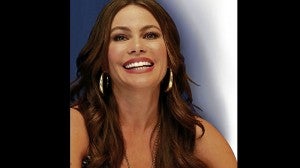 “YOU always want what you don’t have,” says Sofia Vergara. Photo by RUBEN NEPALES

LOS ANGELES – “I think every woman should put on earrings because it’s like an adornment, like on a Christmas tree,” said Sofia Vergara, oversized gold hoops dangling from her ears. Maxim magazine’s “Sofia Viagra” tag came to mind: funny, saucy Sofia Viagra.

“We need the earrings to distract from what’s going on,” the actress quipped, referring to aging. “So I always wear jewelry. I also love diamonds.”

Complimented about her glittering “tree ornaments,” Sofia said, distinct Spanish accent adding to her charm. “I just bought these.” The sassy Colombian beauty added. “And this one.”

She revealed that her boyfriend, Nick Loeb, “is always giving me very good jewelry.” So, is the businessman and politician a keeper? “Yes, I’m very lucky. I love gold.”

We don’t need to issue a caveat – the woman has a sense of humor. Asked what jewelry piece she treasures most, Sofia said, “I have the Rolex watch of my brother who was killed in Colombia. It was his favorite. Women like to wear men’s watches, so I wear it all the time. Thank God, it’s a Rolex. If it’s a cheap watch, imagine that I have to wear it forever.”

The actress, who appears in “The Smurfs” and stars as Gloria, wife of Ed O’Neill’s character in the hit TV sitcom, “Modern Family,” said she never takes herself seriously: “My family is very funny. When I play Gloria, I’m always thinking that she’s a combination of my mother and an aunt. When I get the script, it’s like, ‘How would my mother scream this? How would my mother react to this?’ Comedy is easy for me because it’s something that I have inside.” Then, pausing for effect, she added, “And the beauty… just look [at me].”

Sofia plays a powerful cosmetics executive trying to develop a youth-enhancing potion in “The Smurfs.” We interviewed her when she turned 39 (July 10 in Cancun).

On what she wanted for her birthday, she deadpanned: “The youth serum.”

On people saying there’s something beautiful about aging gracefully, she cracked: “They’re lying.”

Still, she conceded, “There are things that you have to accept. When I do something, like put on cream or go to the dermatologist, I’m not trying to be young. I’m trying to be beautiful. I’m trying to look great. It’s important not to think that something is going to make you look younger.”

How does she feel when she looks at herself in the mirror in the morning? “Bloated, sometimes,” she claimed. “I cannot eat Chinese food the night before. I think it’s going to be a better day when the girl from hair and makeup arrives.”

Confirming that she just signed on as cosmetics brand CoverGirl’s spokesperson, Sofia said, “Makeup has always been in my life. I remember my mother going out at seven in the morning with rollers and her makeup.” She dished in a naughty tone, “I don’t know where she was going after she drove us to school. But it was fun. It’s the Latin woman [in her]. We take it for granted. I never leave the house without at least putting on lipstick.”

About Odile, the boss she plays in “The Smurfs,” Sofia explained, “It was written for a French woman. I don’t know why they didn’t change the name. I don’t go for roles in which I can’t talk like this (in her native accent) because it’s never going to happen. No matter how hard I try. So I hired a speech coach. I was going to work on my [American] accent.

“Six months later, I was horrible with the accent. At auditions, I was thinking only about how I was going to pronounce the next word. I was not getting any jobs because I was just thinking, ‘Oh my God, now I have to say something. I completely forgot about the acting. So I spent a lot of money for nothing. I decided to go for roles that require my accent. I was lucky to get my role in ‘Modern Family.’ Now my accent has gotten worse.”

Sofia was a natural blond back in Colombia (she was born in Barranquilla, also the birthplace of singer-songwriter Shakira). “You always want what you don’t have,” she said. “Everybody wanted the Barbie look with big boobs. It’s so funny because I am blond and I have big boobs, too. My whole family is blond. A lot of people in Colombia, Argentina and Uruguay are blond. I never thought I was not a white person until I came to the United States. I started being talked about as Latin, a member of the colored people.”

A dentistry student, Sofia began her show biz career in Colombia. When her older brother was killed in a kidnap attempt in 1998, she moved with her family to Miami. The actress eventually landed in LA.

She recounted how she went from blond to brunette. “When I was reading with Adam Sandler for a role in ‘Spanglish,’ the director (James L. Brooks) said, ‘I would love you for the role but there’s something off here… I want you to make your hair dark for the screen test.’”

“That’s when I realized what was off the whole time I was trying to audition in LA,” she recalled. “So I went to a hair salon and they put this foam on my hair. They said, ‘You have dark hair until you wash it.’ I didn’t get the part but I thought the dark hair was fantastic. I thought, this is what I need. Now I look like a hot Latina woman. Finally, this was the link that was missing. I went back to the hair salon. I told the woman, ‘I want this hair color for real.’ Immediately, I started getting bookings.”

Those bookings included movie roles, but her biggest break came when she took on the Gloria Delgado-Pritchett role in “Modern Family.” I’ve always had fans in the Latin market but after the first episode in ‘Modern Family,’ Americans – older women, grandfathers with their younger kids – recognized me,” she said. “It was unbelievable after just one season. We were very lucky to have something like that.”

Nowadays, Sofia admitted to splurging on an Imeldific passion. “I don’t [mind] spending all of my son’s college education on bags and shoes,” she teased. “He knows already where the money is going. I don’t [mind] wearing a $10 tee shirt and jeans that are not fancy, but I would pair them with fabulous shoes or an expensive bag. Shoes and bags make your closet look really good. But you don’t need to buy a new bag every week. You buy a new bag every season. There are four seasons …”

Is she bossy like her character in “The Smurfs”? “My son would tell you, yes,” she said, laughing. Manolo, 19, is her son with childhood sweetheart and ex-husband, Joe Gonzalez. “I come from a family of strong women. My mother liked to organize everything – the house, kids. So, of course, you get that but it doesn’t necessarily have to be something bad.” With a smile on her full lips, Sofia continued, “If you do it with respect and consideration for the other people, you can boss them around.”

As for the articles suggesting that her son’s friends must be fantasizing about her, she replied: “I don’t even think about that, but I think they’re used to it because they’re growing up with my son. It’s not like I’m down washing the floor in a G-string. That’s not what’s going on in my house. I’m always dressed up normally. I’m not always wearing makeup. I don’t look that good during the day.”

Sofia may be strong and opinionated, though always with a dash of humor, but she admitted that she doesn’t always know what she wants. “I try not to think too much about it,” she said. “I try to enjoy life every day, every experience and not plan on everything, like think about what I want to have in 10 years.”