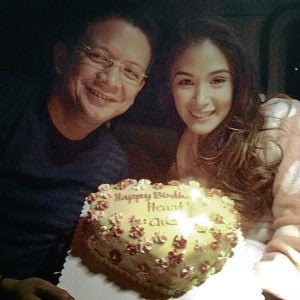 The parents of Heart Evangelista last Monday challenged Senator Francis “Chiz” Escudero, the actress’ boyfriend, to stop “skirting the issues about his character” and answer them.

Rey and Cecile Ongpauco earlier demanded an apology from the senator, whom they accused of being disrespectful and arrogant, and “manipulating” their daughter into “going against her family.” The Ongpaucos appealed to Chiz: “Leave our daughter alone.”

In a statement sent to the Philippine Daily Inquirer, Rey said he was “very offended” by Chiz’s “glib comments” in an interview published on Sunday in the Inquirer.

Rey accused the senator of “instructing” Heart to tell the media that her parents were telling lies. He dared Chiz to refute his claim that the latter was alcoholic. Rey believes this was one of the “dark reasons” that Chiz’s ex-wife, singer Christine Flores, left the senator.

Rey then revealed that Chiz and Heart had been “living together” since July. “He pounced on Heart as early as July (2012) … He acts like the owner of her condos and her cars, and orders her [not to talk] to her own parents.”

Rey challenged Chiz to admit that he gave Heart an “expensive, diamond-encrusted” watch. He also claimed the senator had “boasted” that he could order the deportation of Heart’s ex-boyfriend, Japanese-Brazilian model Daniel Matsunaga, “or even send him to jail.”

With the elections coming up, Rey said Chiz, whom he described as “a smooth-talking politician,” was out to “clean up his backyard.”

The Ongpauco patriarch said it was a “tragedy” that his daughter had “turned hostile toward her own parents.”

Rey added: “Chiz can have Heart … However, his political ambitions do not give him the right to libel me and my wife, [to claim] that we’re lying. I am ready to take a lie detector test anytime. Is Chiz [ready]?”

The Ongpaucos issued the statement in reaction to things that Chiz said when he visited the Philippine Daily Inquirer office on April 4.

For instance, the senator said he also had children and he would have problems with them for sure when they grew up, but he would not call a press conference “to say bad things about them.”

The Ongpaucos called a press con on March 14, during which Cecile claimed the senator had “seduced” Heart into thinking he would become president by 2016 and she would be first lady. Cecile said the family found Chiz’s relationship with their daughter “unacceptable” because the senator was unable to give their 28-year-old daughter a Church wedding. Chiz’s first marriage was annulled by the court last year. His Church wedding has not been annulled.

Chiz, 43, said Heart was “devastated” by the conflict, but that she was “getting better.” He related, “What you saw on TV was basically how she was after the incident (the parent’s press con) and the week after that.” Heart gave an interview to GMA 7’s talk show, “Hot TV,” on March 24.

But Chiz insisted that Heart was staying at “a friend’s house.” The actress has left her condominium unit in Makati, where her parents also live. “She feels uneasy, I guess,” he added.

He’s not one to burn bridges, though, he said: “That’s why, as best I can, I’m maintaining respect [sic]. Heart and I would never say anything negative against [her parents]. We just try to understand where they’re coming from.”

Reporters present on the night of his Inquirer visit noticed that Chiz was wearing a pink-and-black bracelet that had Heart’s name on it. He said she wore one that had his name. They bought the love bands, he said, during their four-day trip to the United States in February.

“They were being sold on the sidewalk for $9 apiece. You get to choose the color of the yarn and they make the bands while you wait,” Chiz said.

The trip is his most expensive gift to Heart so far, he volunteered. “She wanted to take time off work. We went to San Francisco, where I got to meet her half-sister, then to Napa Valley for some wine-tasting,” he said. “I’m no connoisseur, though. My only requirement of wine is that it should cost P300 a bottle, or less.”

Because of Heart, the senator said, “I smile more often [now].” He hardly hangs out with Heart’s friends from show biz, but gets to check out party places like Republiq in Pasay City and Privé in Taguig City with her.

While he is affected by the row with her parents (“Hindi po ako ‘Pusong Bato’”), he said he wasn’t about to consider suicide, like Romeo to Heart’s Juliet.

From time to time, he said, he gives Heart pieces of advice on her finances…and twice he surprised her at work. Chiz recounted: “First I asked if it was OK to bring food. She said I didn’t have to—there are over 200 crew members. But on her last birthday, I did. And since it was also Valentine’s Day, I gave flowers to all the women on the set.”