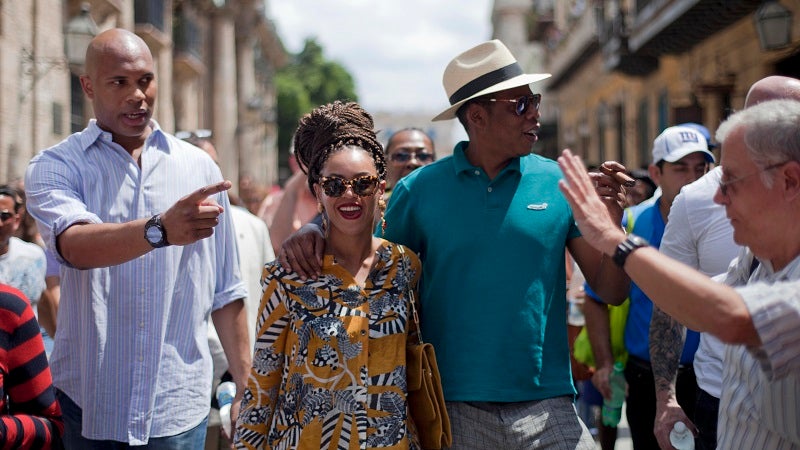 US singer Beyonce and her husband, rapper Jay-Z, right, tours Old Havana as a body guard, left, and tour guide, right, accompany them in Cuba on April 4. R&B’s power couple is in Havana on their fifth wedding anniversary. AP

MIAMI—US Treasury officials say the trip by Beyonce (bee-AHN’-say) and Jay-Z to Cuba was licensed as an educational exchange.

Assistant Treasury Secretary Alastair Fitzpayne wrote in a letter Tuesday to congressional representatives that the famous hip-hop couple traveled to Cuba with a group authorized by the Office of Foreign Assets Control to promote people-to-people contact in Cuba.

The letter was released Tuesday by US Representative Ileana Ros-Lehtinen (ih-lay-AH’-nah rahs LAY’-tih-nehn).

Ros-Lehtinen and US Representative Mario Diaz-Balart (dee-AZ’ bah-LART’), both Florida Republicans, had expressed concerns to the Treasury Department about the trip and wanted to know if it was licensed.

Beyonce and Jay-Z marked their fifth wedding anniversary in Havana last week. US citizens are not allowed to travel to Cuba for mere tourism, though they can obtain licenses for academic, religious, journalistic or cultural exchange trips. The so-called people-to-people licenses were reinstated under the Obama administration.