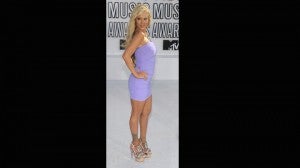 NEWPORT BEACH, California – Police said former adult film star Jenna Jameson has been arrested after a report that she attacked someone at a California home.

The 38-year-old Jameson, born Jenna Marie Massoli, was given a court date to face a misdemeanor battery charge and released on her own recognizance.

In May, Jameson was arrested for drunken driving after hitting a light pole. She pleaded guilty in August and was sentenced to three years’ informal probation.