TV5 cuts its slice of the TV pie | Inquirer Entertainment

TV5 cuts its slice of the TV pie 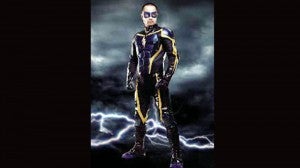 KAPATID channel is banking on Derek Ramsay as “Kidlat” in the action department.

Viewership surveys show that the country’s two leading TV networks dominate the ratings race. That’s no surprise. One network is more popular than the other—but, which is which depends on the type of survey you follow, and the scope of the area (nationwide? Metro Manila?) being covered.

What’s more surprising is the survey result that ascribes around 15 percent of the market to the relative newbie, TV5.

Some people may feel that, after all the billions that the new network has sunk into its facilities and productions, it should be doing better.

We, however, find the percentage—about half what each of the other leading networks control—a good showing for the new outfit, at this point.

In fact, we privately felt that TV5 wasn’t doing as well as that, since some of its drama and comedy shows had been “underwhelming.” But, the more official figure of 15 percent indicates that the new network is doing something right.

Of course, it could do better. If all those billions spent thus far were expended to secure a bigger slice of the market and the country’s total TV viewership, improvements should be made in the way that the new network does things.

For instance, it pays a lot of money to secure the services of some big stars, but tends to fritter that key advantage away by giving those “expensive” luminaries less-than-remarkable shows to top-bill.

Now, part of the problem may be the stars themselves: After clinching those juicy contracts, some of them may have become too smug to do really good work. Still, the network has paid a lot for their services, so it’s entitled to get value for money!

The contract stars’ less-than-admirable attitude and work ethic apart, there’s “something” about some TV5 productions that fails to tick and click—too much predictable melodrama when it comes to the “serious” stuff, and not enough real humor in its comedy productions.

In addition, there’s a general lack of clarity and dynamism to the productions’ storytelling, which is essential to keep viewers interested and watching regularly.

If the studio’s bosses are really interested and concerned, they should watch a TV5 show and then view a similar production by a leading network—and the difference should become clearly apparent.

Still, as we’ve noted, a 15-percent share of the market is a promising start, so TV5 should be heartened by the affirmation.

If its shows’ storytelling improves, it would do even better.

Finally, about those contract stars who aren’t giving value for money: We hope that they decide to work harder and better for their own sake—because, if they keep getting associated with so-so productions, the stellar clout that they spent so many years building up could eventually get eroded.

Since we value their proven talent and past efforts, we hope that they will do their best to keep that from happening, or it could be a “lose-lose” situation all around!