Sunshine Cruz: The kids ‘resented their father at one point’ 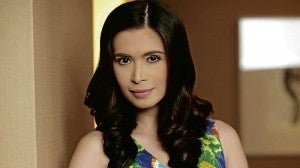 MANILA, Philippines – “The girls know what’s going on. They even resented their father at one point.”

Thus said actress Sunshine Cruz when asked how her three daughters – Angeline Isabelle, Samantha Angeline and Angel Francheska – have been coping with her highly publicized breakup with husband Cesar Montano.

“They get to read about it online. They know how to Google it. It’s hard to explain to them what really happened so I just told them to ask their dad about it,” Cruz told the Philippine Daily Inquirer on Wednesday during a media gathering for her latest drama series, “Dugong Buhay,” on ABS-CBN.

“What would you have me do? Tell them bad things [about their own father]? I’m not like that—although there was a time when I snapped, I got angry and posted a lot of things [on Instagram]. I still think it was my right as Cesar’s wife.”

In February, Cruz posted on her Instagram account that another woman, a starlet named Krista Miller, was the reason for their separation. She had said it was their children who informed her about the affair: “I have been really quiet but when (my) kids are affected unfair na ‘yon. It (was) actually them who told me about this. They’re hurt! I’m moving on… with my children.” However, Montano and Miller denied this in separate TV interviews.

Despite the problems they were facing as a couple, Cruz said she never kept her children from seeing their father. “Buboy (Montano’s nickname) is a very good parent. He’s very generous and loving to our kids. In fact, the girls were with him while I was busy taping [for the TV show] in Tagaytay,” the actress said.

Cruz added that she has already forgiven Montano. “This is why I am able to smile now. I’m a Christian. I don’t dwell on anger too long. I will only get wrinkles that way. I understand that each of us have weaknesses,” she added.

Asked whether or not there was hope for reconciliation between them, Cruz said: “Only God knows. The challenges I’m facing now only makes me stronger. There was a time five years ago when I left him for a year. At that time, I didn’t accept work because I waited for him to come back to me. Things are different now. I’m a single mom. I’m independent and I’m happy.”

“Now I get to appreciate more the company of my children, family and friends,” she stressed, adding that finding a new love wasn’t part of her immediate plans. “I just want to focus on my girls. I don’t see myself having a boyfriend so early. The girls said to make sure they’re already 18 when this happens.”

Cruz said she never regretted being inactive from show business 13 years ago. “Maganda naman ang kinalabasan, I got to watch my kids grow,” she explained. Now that she’s back to acting full-time, Cruz said she has imposed limitations on herself. “I turned down offers that require me to do sexy scenes. In fact, I had to consult my kids before agreeing to pose for the cover of [the April issue of] FHM again.”

She added: “My second child Sammie asked too many questions, like what I’d wear for the pictorial. They all said ‘we trust you, Mommy.’ FHM is known to be very provocative, so my own mom was present during the shoot to watch over me. When they all saw the finished product, they’re very proud of me. The girls went, ‘Mommy you’re so sexy.’”