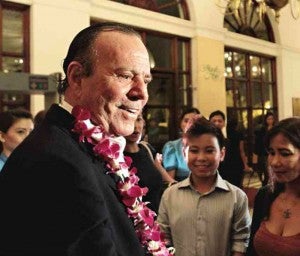 Julio Iglesias arrives on Tuesday by private plane for his dinner-concert at the Manila Hotel on Saturday. The Guinness World Records recently awarded him best-selling male Latin artist. At right is classical and pop singer Kris Gonzales. GRIG C. MONTEGRANDE

MANILA, Philippines—Renowned Spanish singer Julio Iglesias arrived in Manila by private plane on Tuesday accompanied by a 26-man entourage. The 69-year-old crooner went straight to the Manila Hotel, where he is slated to hold a dinner-concert on Saturday to kick off the Asia leg of his 2013 World Tour.

Iglesias is embarking on an age-defying, grueling tour, which will take him to the Philippines, South Korea, China, Singapore and Taiwan in Asia.

He last performed in the Philippines in 2010 in his “Heart of Gold” concert, which raised funds for the rehabilitation of the houses of victims of Typhoons “Ondoy” and “Pepeng.” This time around, Iglesias will perform for the benefit of the Manila Friendship Lions Club 301-A1 and Joy of Living Foundation.

The romantic singer has a special connection to Filipinos. The mother of three of his eight children—Chabeli, Julio Jr. and Enrique—is Filipino-Spanish journalist, socialite and TV host Isabel Preysler. The couple met in 1970, during Iglesias’ transition from being a football player for Real Madrid Castilla to recording artist. They were married in 1971. Their marriage was annulled in 1979.

Julio Jr. and Enrique have become singers themselves, while Chabeli is a socialite and TV personality.

Iglesias was in Beijing on April 1 to receive the Guinness World Records award as the world’s best-selling male Latin artist. He was in China ahead of a three-show tour of the country, where he remains hugely popular due to his inoffensive, idealistic brand of singing. Iglesias also received an award as First and Most Popular International Artist in China from his record company, Sony, although it was unable to say how many records he has sold in the country.

Iglesias obtained a law degree at his father’s behest though he is not known to have ever practiced law. In the 1960s, he met a car accident which smashed his lower spine, permanently weakening his legs and requiring therapy even up to late last year. The accident, however, opened up what would become an iconic singing career for the artist who is considered among the five best-selling Hispanic music artists in history, having sold over 300 million records worldwide in 14 languages. He holds more than 2,400 certified gold and platinum records.

All of this started during Iglesias’ hospitalization, when a nurse gave him a guitar to kill time.

Since then, the dusky singer with the rugged good looks discovered he could melt ladies’ hearts with his voice as well. With a report from AFP