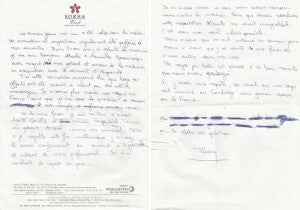 Reproduction of a document received from Adventure Line Productions on April 1, 2013 shows the suicide letter of Thierry Costa, a French doctor who was working for “Koh Lanta” the French version of the hit reality TV show “Survivor”. Costa, who committed suicide on April 1, 2013 in Cambodia, left a posthumous letter in which he said he felt “dirty” following the release of “false articles” in the media, after the death of a 25-year-old candidate Gerald Babin on March 22, 2013 during the filming of the show. AFP PHOTO / ADVENTURE LINE PRODUCTIONS

PARIS—The suicide of a doctor on a hit French reality TV show sparked shock on Tuesday, with some blaming media pressure for his death while others urged restrictions on reality programs.

Thierry Costa, a physician on “Koh Lanta” — the French version of “Survivor” — killed himself Monday in Cambodia just over a week after a candidate died on set, citing “unfair accusations” against him in the media.

“I hope the witnesses and websites that published these horrors about the Koh Lanta doctor had a bad night,” @Sarah_IC said on Twitter, one of many who blamed sites and social networks for spreading misinformation about the candidate’s death.

The contestant — 25-year-old Gerald Babin — died of a heart attack on the first day of filming the adventure show on the tropical island of Koh Rong on March 22, prompting French broadcaster TF1 to axe the show’s 2013 season, its 16th.

His death — the first during any French reality TV program — sparked questions about the way the show was run.

One widely used anonymous witness statement published on popular website Arret sur Images questioned Costa’s handling of the candidate’s death, accusing him and the production team of prioritising the show over the victim.

The two deaths have also sparked a wider debate in France over reality TV shows, which are hugely popular.

“Koh Lanta” — which reaches an average of seven million people every episode — is an adventure program that sees candidates battle it out to survive on an island.

It is just one of several hit reality TV shows in France that touch on topics as varied as the search for talent in “Star Academy”, Big Brother-type voyeurism in “Secret Story” or cooking skills in “Top Chef.”

In a Tuesday interview in Le Parisien newspaper, Jeremie Assous — the lawyer for Babin’s family — hit out at what he said were “many labor code breaches but also breaches in hygiene and security rules” in TV reality shows.

He questioned why there was just one doctor for 150 candidates and production team members working on “Koh Lanta.”

“We could require them to use a psychologist” who would monitor the mental health of reality TV participants during and after filming, she said on Europe 1 radio.

Several candidates in France have in the past committed or attempted to commit suicide after their reality TV show ended.

In 2011, Francois-Xavier Leuridan — who once took part in “Secret Story” — killed himself aged 22, while Loana Petrucciani, one of France’s first reality TV stars, has attempted suicide several times.

French authorities have already opened a preliminary enquiry into “involuntary homicide” to determine the cause of Babin’s death, although the Cambodian authorities have determined that he died of natural causes.

According to judicial sources, videos shot while the television program was being made will be handed over to police on Tuesday, to help with the investigation.

The show’s candidates and those in charge at ALP will also be questioned by police.