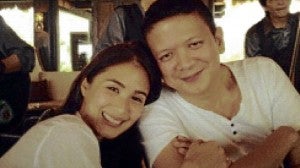 MANILA, Philippines—Had this been a political squabble, the glib-tongued Senator Francis “Chiz” Escudero would easily demolish the opponent with his charm and effusive language.

But the reelectionist senator has admitted that his hands (and tongue) are tied in the case of a possible face-off with Heart Evangelista’s parents, Rey and Cecile Ongpauco.

Evangelista, 28, is Escudero’s girlfriend for eight months now. Known as Love Marie Ongpauco in real life, she is the sixth and youngest child of the couple.

Evangelista’s parents have announced in a press conference last week their displeasure over Escudero’s behavior and their fear that the senator, hardly a middle class dude, would be unable to support their daughter’s material whims in case they end up legally bound to each other.

But arguing with the parents of one’s ladylove is definitely a taboo. Not that the senator plans to.

Escudero insists there should really be no quarrel with Evangelista’s folks at all as he had paid the proper respect to the couple.

“Hindi ko ba ginawa ‘yan? (Didn’t I do that?)” he asked, referring to efforts to get close with the parents.

At one point, the senator was reminded of their matchmaker Sen. Miriam Defensor Santiago’s advice for him to woo Evangelista’s parents as suitors would usually do.

At one point, the senator who is often introduced as a native of Sorsogon, was also asked whether he tried his hand at cutting firewood like rural men courting women.

“Hindi ako nagsibak ng kahoy dahil may kuryente naman (I did not cut firewood because they have electricity),” he replied.

But whatever efforts he exerted, Escudero noted that at this point, it seemed that everything was for naught.

Evangelista’s beau said her parents’ allegations that he had no manners caught him by surprise. In a column last week, the Philippine Daily Inquirer’s Ramon Tulfo initially quoted an unnamed source saying the Ongpaucos found Escudero “uncouth” and “disrespectful.”

The source also said the senator reeked of alcohol during his encounters with Evangelista’s parents.

In a subsequent column, the Ongpaucos were quoted directly, saying that Escudero acquired a P5 million gold watch through a “Chinese businessman” and gave it to their daughter.

An expensive trailer was allegedly one of Escudero’s pledges to Evangelista, along with the prospect of earning big money through a “law firm” where the senator is involved.

The Ongpaucos are also anxious that their daughter would eventually live in sin with Escudero since he has only acquired so far a civil annulment of his marriage to Christine Flores with whom he has twin children.

At this point, Escudero expressed concern about how things have adversely affected Evangelista whose manner he noted, has changed after her parents’ public revelations.

Gone were the easy laughter and bright smile, the senator said.

But as all love stories go, the senator agreed that what could not destroy them would make them stronger.

He expressed suspicion about parties out to take advantage of the situation to smash his reelection bid.

The Social Weather Station’s latest report showed Escudero tied at possible third and fourth place with San Juan Rep. JV Ejercito-Estrada. The senator used to be safely ensconced at No. 2 since surveys appeared in 2011.

“May nasa likod at may nagsasamantala pero hindi para sa aking sabihin dahil puro kuwento-kuwento lamang ‘yon at maaring hindi rin naman totoo. Subalit hindi na siguro ako magugulat kung may nagsasamantala. Pero kasama na rin siguro ‘yan sa gimmick sa pulitika (People behind the scenes are taking advantage of the situation but it’s not for me to say because these are all stories and they may not be true.  However, I would not be surprised if indeed some groups are taking advantage.  This is all part of gimmicks in politics),” he said.

Several weeks back, the senator said he got word that former President Joseph Estrada, now running for mayor of Manila, has been “campaigning against” him.