Heart Evangelista’s parents break down: ‘Escudero is an opportunist’ 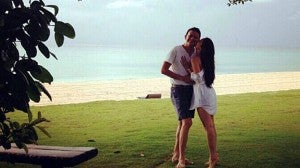 Sen. Chiz Escudero and his girlfriend Heart Evangelista are caught in this photo apparently having no cares in the world except for their love for each other. On Wednesday, March 20, 2013, Evangelista’s mother, Cecile Ongpauco, claimed the senator was “manipulating” her daughter to go against her family. FACEBOOK PHOTO

Cecile Ongpauco, mother of actress Heart Evangelista, is demanding an apology from Sen. Francis “Chiz” Escudero for being supposedly disrespectful and arrogant and for “manipulating” her daughter into “going against the family.”

Evangelista was a “victim,” she said, and appealed to Escudero again to “leave my daughter alone.”

In a phone interview with the Inquirer Wednesday afternoon, Ongpauco said Evangelista, the youngest of her six children, had moved out of her (the actress’) condominium unit in Makati City. The Ongpaucos have their own unit in the same building.

“We don’t know where she is,” the actress’ mother said, adding that before the misunderstanding, she had a “beautiful relationship” with her daughter.

“We were together almost every day. She would cook breakfast for me and her dad (Rey Ongpauco). We were OK,” she said. Mother and daughter were last seen together when the actress renewed her talent contract with GMA 7 early this month.

Evangelista playfully refers to Ongpauco as her “mommyger,” or short for mommy and manager. During the contract signing, Ongpauco told the media: “Heart is 28 (years old now) and very capable of making her own decisions … She’s a woman now; I’ve had to adjust [to this].”

But on Wednesday, Ongpauco was saying something to the contrary, expressing grave concern for her daughter, whom she said was “still young and innocent, overprotected as a child.”

Evangelista “does not have a mature mind and still thinks like a young girl,” the mother said. “She is easily swayed by people who prey on her insecurities and lack of confidence.”

Ongpauco added: “My husband decided to come forward and discuss the issue because he can no longer take it. This is the first time he’s speaking publicly in all the years that Heart has been in show business.”

The Inquirer tried to get a reaction from Escudero on Wednesday but his staff said the senator was “not issuing any statement anymore” other than what he said on Tuesday.

In a statement she sent to the Inquirer, Ongpauco said the family was “mortified” about the way Evangelista defended Escudero in her own statement on Tuesday. “We have the right to defend ourselves against unfair accusations made by Heart, under the dictation of Chiz, who clearly wrote (what Heart signed).”

Ongpauco cited her family’s reasons for finding Escudero’s relationship with Evangelista “unacceptable.” Top of the list was Escudero’s inability to give Evangelista a church wedding. The senator’s first marriage—to singer Christine Flores—was annulled by the court last year. Ongpauco pointed out, however, that Escudero could not yet remarry in church.

She also accused the senator of having a personality problem: “He projects himself as a wholesome candidate, but we know better.” She challenged Escudero to “stop hiding behind Heart’s skirt and using her to shield yourself from very serious questions about your character (sic).”

In the statement, she raised the issue of Escudero being an “alcoholic,” recounting the first time that she and her husband met the senator:

“Heart called her dad very late at night, saying this man wanted to meet us. Rey relented. When Mr. Escudero arrived, he was reeking (of) alcohol. I was shocked to see him slouched on the sofa, his legs spread out. Heart’s dad is very conservative. He doesn’t even drink. Mr. Escudero asked him what he did for a living, as if it was a job interview.”

Her husband asked to be excused, Ongpauco said.

The second time, according to the statement, Escudero was drunk again. “He was carrying a bottle of red wine” and like the first time, “he hardly spoke a respectful word.”

The statement continued: “To this day he hasn’t formally asked for our daughter’s hand, or discussed how he will support her and his (former) wife at the same time.”

Ongpauco said Escudero had “seduced” Evangelista into thinking he would become the President by 2016. “And then she [would] be ‘first lady.’ Furthermore, he once boasted to Heart that he ran a lucrative law office, and that a multinational [company was] poised to pay the law firm over P200 million a year for [services].”

She said Escudero also claimed he had the financial backing of “a businessman listed among the 10 billionaires of the Philippines, but who is under investigation by the Senate.” Evangelista believed all this, Ongpauco said in the statement.

Clearly, Ongpauco pointed out, Escudero was an “opportunist.” He had “virtually moved into [Evangelista’s] condo unit,” the angry mom said, “using her Mercedes Benz at will.”

She admitted, however: “Heart encourages this behavior from Chiz, as she did with her prior boyfriends.” Then she revealed that her daughter had been diagnosed as a “needy personality,” but refused psychiatric treatment.

Ongpauco said Escudero had previously “urged” Evangelista to fire her as her talent manager.

“All these acts indicate that his public persona is far from his real character,” she said. “My husband and I are in the process of gathering evidence to prove that he is a Jekyll-and-Hyde personality, as suggested by a print columnist.”

Ongpauco said the family was considering filing a libel case against the senator “for claiming that he [was] caught in the middle of a family feud, when [he] is the very source of our family feud. We might also file an additional criminal complaint for incriminating an innocent person.”

The family was likewise poised to file “a civil complaint for damages under the Civil Code (against Escudero) for meddling with, or disturbing the private life of another.”

In a text message to the Inquirer on Tuesday, the senator said in Filipino: “It is enough to say at this time, that, even though I am slightly involved, as much as possible, I don’t want to meddle in the misunderstandings between parents and their daughter … I am not part of show biz. I don’t combine work with my personal life and I don’t allow anything personal to affect my job.”

Evangelista has backed Escudero, saying, “Chiz and his family have shown me nothing but goodness and affection. There is no reason for them to get dragged into this.”

The actress said this was not the first time her parents had publicly opposed her relationships.

She said she “gave in” to their wish for her to leave actor Jericho Rosales because “I wanted them to be happy … but now I believe I already have the right to decide how to live my life, who to love and to be with.”