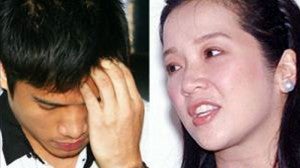 Accusing her former husband James Yap of overstepping his boundaries and of attempting to seduce her while visiting her home, and of inflicting psychological harm on their son James, or “Bimby,” actress and TV host Kris Aquino has filed a temporary protection order (TPO) from a Makati City court.

The TPO will be good for 30 days from its issuance, although after a hearing, the petition also asks that the protection order be made permanent.

“Protection orders” are a provision of the law against violence against women and their children to protect victims of domestic violence from further harassment or harm by their spouses or partners.

In the petition, Kris asked the court to order Yap to stay away from her, her 5-year-old son Bimby and any household member, keep a distance of at least 100 meters, and to stay away from her residence, school, place of employment or any place frequented by her and her son.

As detailed in the petition, during a visit to Kris’ condominium unit last December to pick up his son as part of his twice-weekly visitations with Bimby, Yap entered his former wife’s bedroom and made “overt sexual advances,” which Kris vigorously resisted, provoking Yap to “utter mean and malicious statements” in the face of rejection.

The petition cited that James acted “as if he was still entitled to his matrimonial rights,” even if they are no longer married, forcing himself on her in full view of their son.

Horrified by the scene, which was followed by a heated argument, Bimby told his father to leave the room and to “stop hurting” his mom, the petition added.

The petition also mentioned that Bimby had even positioned himself between his parents, and begged his mother to “tell him to go away.” Since then, the petition said, the 5-year old has exhibited signs of being highly upset and agitated whenever he is in his father’s company or when he hears his voice on the phone.

“The physical, sexual, emotional, psychological and moral harm and injury foisted (on that day) was occasioned by the unfettered access of respondent Yap on the household and persons of the petitioners,” the petition noted.

Kris and James’ marriage was finally deemed annulled last year, with a settlement of several properties and a “hefty sum” going to Yap. The petition also states that despite the grant of twice-weekly visitation rights to the professional basketball player, Yap showed hardly any interest in seeing Bimby, getting together with the boy for a maximum of 10 times in a year.