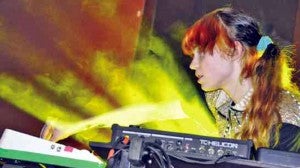 The night of March 14, a Thursday and, for most, the “barren” day before payday, seemed like a big risk to take on as concert playdate.

But Claire Boucher, aka Grimes, walked up onstage smiling and confident at Hard Rock Café, Makati, egged on by 500 or so “spirited” fans who had helped themselves to a swig or two at the bar while waiting for the crew to set up her equipment.

The lean 25-year-old Canadian musician-artist gingerly stepped behind a deck of keyboards and sound mixers. As the fog machine hissed mist and the rhythmic electronic beat of “Symphonia Ix (My Wait is U)” faded in like an approaching night train, the people raised their hands and beer bottles, and whooped.

Grimes’ journey into an alternate universe had begun, and this crowd had paid good money to hop aboard.

It was a universe populated by ethereal voices digitally looping into each other, swirling with techno-generated sounds and synth beats. Physically, what the people saw was Grimes on the mic, a backing vocalist (sitarist Ami Dang for this night), two dancers, a keyboard and sound/voice mixer. The sound coming from the speakers, however, was like what one hears in the fleeting moment between sleep and wakefulness.

Grimes describes her music as “experimental pop, sensual and immediately gratifying, abstract and out of body.” This is evident in the much-applauded “Genesis,” which also highlights her fondness for dance beats. In fact, all of the nine songs she performed that night made the crowd, jump, strut or sway. Some mimicked the performer’s quirky movements.

Critics note that Grimes is heavily influenced by industrial, electronic, pop, hip-hop, R&B, noise rock and even medieval music. Her performance of “Oblivion,” it might be added, harked back to OMD (Orchestral Manoeuvres in the Dark), New Wave and New Age music and, at times, Enya and Bjork in “hyperactive” mode.

The vocals on “Nightmusic” are purposely nebulous, and we couldn’t make out the lyrics that night. Listening to the recorded version helped little. A Google search finally yielded the the words and here’s a stanza: “…you’re just… always make that… heart/Die when I… when I said, don’t make turn away/… I turn away…” Oh, well. But it sounded so good. (Grimes does admit: “When I’m doing my best work is when I’m not very logical.” Point taken.)

The lyrics do sound more logical in her other songs. In between the synthesized kettle drums of “Phone Sex,” Grimes sings about “talking to God on the phone” and says: “I am living on the moon.” In “Be a Body,” two of the song’s “recognizable” lines go: “I close my eyes until I see/I don’t need hands to touch me.” She becomes much more voluminous in the lengthy “Vanessa.”

But who cares what Grimes says. It’s the sound that draws listeners in like moths to a neon candle. For “Circumambient” and “Infinite Love Without Fulfillment,” she stepped out of the confines of her techno-machines, moved to the front of the stage and started to dance every which way.

A YouTube comment neatly sums up Grimes to the uninitiated: “This girl is weird, but she’s definitely growing on me.”