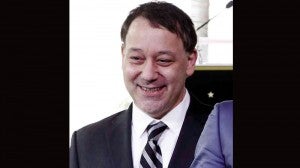 The original “Wizard of Oz” movie starring Judy Garland is one of the film gems we’ve watched over and over through the years. So, when we heard that Sam Raimi was megging its “prequel,” “Oz the Great and Powerful,” we wondered if the new film would measure up to the vaulting achievement of the original production. After all, it had it all—great visuals, imaginative storytelling, lovable characters, plus Garland’s endearing portrayal and musical numbers. —Why remake or “prequel” it at all?

When we watched Raimi’s take on the revered material, we got some instructive answers:

The prequel starts its storytelling in black and white—a clear homage to the original’s own deceptively small and stark opening up to the time Dorothy (Garland) was blown up, up and away by a tornado, from her sleepy town in Kansas to the magical Kingdom of Oz, whose all-powerful ruler remained invisible for the most part.

In Raimi’s movie, however, he’s all over the place and holds the film’s storm center. He’s characterized as nothing more than a cheap magician and fake prestidigitator—so, how then can he convince the citizenry of Oz that he’s their all-powerful king? —Therein lies the prequel’s tale:

When the mere magician (James Franco) unexpectedly ends up in Oz, the new movie’s black-and-white intro ends, and the screen suddenly bursts into an exalting extravagance of colors, fantasticating images and state-of-the-art digitized special effects that the original movie’s creators couldn’t even dream of conjuring up in the ’50s.

Well, many decades have elapsed and the film medium has gained numerous strengths, so most anything film artists want to visualize on the silver screen is now only a matter of time, production budget and digital expertise!

—So, that’s the reason why “Oz” is being reimagined now—to take advantage of the film medium’s highly developed and enhanced visual brilliance, which Raimi utilizes to great effect to tell his story.

Another new element that the film highlights is its less childlike and more psychologically with-it presentation of its central conflict—no longer between the invisible ruler of Oz and the kingdom’s populace, but between the three fairy princesses who now rule the realm—with conflicting motives at heart.

At first, the evil fairy or witch is supposed to be Glinda (Michelle Williams), but that’s according to her sister, Evanora (Rachel Weisz). 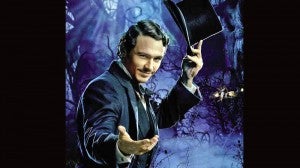 FRANCO. Cast as a cheap magician and fake prestidigitator.

Soon enough, however, it turns out that it’s her motives that are suspect—but, not before she has tragically tainted their youngest sister, Theodora (Mila Kunis), with her evil intent. Thus, Franco’s character now has to fight two powerful witches, and the challenge looks impossible—until he gets the kingdom’s heretofore placid and subservient subjects to fight for their freedom.

This final battle includes an army of munchkins—another homage to the original film, which was full of the cute and childlike creatures. Indeed, the only key characters from the old movie who are not given a new lease on life in Raimi’s movie are Dorothy’s jaunty “sidekicks,” the Lion, the Tin Man and the Scarecrow.

—Come to think of it, however, it was wise of Raimi not to come up with his own takes on them, because they were so iconic and choice that his versions would most probably suffer in comparison to them.

Raimi’s best original creation is the digitized character of China Girl, a porcelain figure whose broken legs are glued back together by Oz, who thus earns her eternal gratitude.

China Girl is such a delightful creation that, in our view, she’s the best thing about Raimi’s deft re-imagining of the wonderful, wonder-full world of Oz!

Read Next
History comes vibrantly to life in ‘Lincoln’
EDITORS' PICK
vivo brings to the Philippines a powerful smartphone with a slimmer body, the vivo Y02s for only PHP 6,499
Apple warns of flaw that lets hackers into iPhones, Macs
46% of schools nationwide to have full face-to-face classes on Aug. 22
House energy committee chair Arroyo bats for cheap electricity
What to watch out for when selecting a video surveillance solution
Heads may roll at BOC, says Palace if sugar smugglers are allowed to use recycled import permits
MOST READ
DepEd to give teachers P5K cash allowance within first week of classes
Dressing the dead: Indonesian villagers clean corpses in afterlife ritual
DOJ indicts bank officer in $2.1 billion Wirecard fiasco
Mayor bares issues vs closed QC school
Don't miss out on the latest news and information.