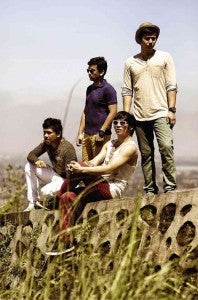 Callalily’s Kean Cipriano is one of the few OPM band frontmen today who has one foot in show biz. In between performing and creating new music,

the 25-year-old lead vocalist finds time to do acting projects for both television and film.

Kean’s band has so far released four studio albums (“Destination XYZ, “Fisheye,” “Callalily” and “Flower Power”) since bursting into the music scene as one of the breakout OPM groups of 2006, with their hit single “Stars.”

His filmography isn’t too shabby either, having starred in films both in the mainstream and indie scenes such as “Ang Babae sa Septic Tank,” “The Reunion,” “Praybeyt Benjamin,” “Madaling Araw, Mahabang Gabi” and “San Lazaro.”

What’s in store for Kean this year?

We’ll just do what we do, which is performing and writing new music and material. I also have other plans, but I don’t want to reveal them just yet. As for acting, it’s still early to tell. But it will come.

How do you juggle music and acting?

How would you compare acting and performing on stage?

I consider both as performance. The difference is that concerts are live—anything can happen. There are no cuts, change of lights or retouching like in TV or film.

Do you want to do another indie film?

Why not? If I can give justice to the material, I’ll commit and give my all.

How do you find show biz so far?

Show biz has always been very good to me. And if they need me in a particular project, I’ll do it. But Callalily is my priority.

What are your expectations for the music industry this year?

I’m not Nostradamus, but I feel that 2013 is going to be a really good year for music.

I think the rock scene will be thriving because of all the young bands coming out with fresh sounds and new albums, as well as the old dogs continuing to create new material.

What’s your best and worst experience on the Ginuman tour?

The band and I have a lot of memorable experiences, good and bad. But I prefer not to share the terrible ones! We always try to be positive. We don’t care about what our detractors think … for as long as we create good music.

The best thing is probably seeing and being warmly welcomed by our fans. It’s a great feeling when your music reaches different provinces in the country and different places all over the world.

What about the girls?

Oh, we would love to meet them all! Some of them approach us and tell us how much they love our music, or that we had a good performance—nothing more!

Do you prefer playing in a large or small venue?

I get nervous regardless of venue, but more so in smaller places. In an intimate setting, eyes frequently meet. You get to see everything.

You see whether some people are not listening. But nervousness is my friend—it helps me perform better.

How would you describe your latest album “Flower Power”?

The songs talk about real stories from real people. I like the album’s energy.

We incorporated a lot of new elements. We added HandSonic percussions and synthesizers. And this is the first album where I played the guitar during recording.

Read Next
Dingdong defends Marian’s best actress award, sexy pictorials
EDITORS' PICK
The Best Tech Gifts For The 2022 Holidays
Is it safe to talk politics again at family gatherings? ‘The Reconciliation Dinner’ shows us what that’s like
EDITORIAL: To a bike-friendly future
House energy committee chair Arroyo bats for cheap electricity
vivo’s coming to town to grant wishes with more holiday promos
Pagasa: Warm, sunny Sunday in most parts of PH
MOST READ
LOOK: Vhong Navarro transferred to BJMP detention facility in Taguig
The Elephant Man in the Senate
Posh village as ‘shabu’ haven
LOOK: Zanjoe Marudo bonds with Ria Atayde, her family
Don't miss out on the latest news and information.