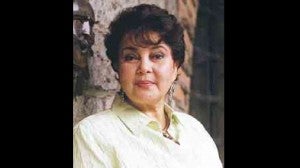 FUENTES. Comeback of the year.

We’re so happy that former movie queen, Amalia Fuentes, has announced that she’s agreed to make a film again after years of relative professional inactivity, with her good friend, Elwood Perez, directing—and making a comeback of his own. —A win-win situation all around!

Yes, Amalia may be overweight, but she remains a vital and idiosyncratic personality and talent, so we expect her comeback portrayal to be a lulu.

Also an unexpected should-see in our book is Vilma Santos’ next starrer, the indie production, “Ekstra,” which Jeffrey Jeturian is shooting for the Cinemalaya festival this July. Vilma’s first indie involvement casts her as a bit player in the TV-film trade, and stars like Piolo Pascual and Marian Rivera have agreed to play cameo roles in the movie, to further boost its stellar clout.

Jeturian should be credited for coming up with notable projects for our senior stars.

More to the point, Vilma’s new starrer could end up as one of the few indie productions to do well at the tills when it’s subsequently released in mainstream theaters.

Another development that should be underscored is the renewed interest in film archiving and restoration. Old movies are part of our national patrimony, so they must be recovered and restored.

If a comprehensive Filipino film archive is set up soon, it should be named after star-producer-director Fernando Poe Jr., because he was a pioneer in film preservation.

Also worth noting and supporting is the renewed interest in local books about the movies, like the recent publication of a book on the Carmen Rosales.

Similarly, we laud the move of our local movie channels on TV to remind viewers of our film industry’s past glories. For instance, only last week, a movie channel presented a mini-festival of the movies of Paraluman!