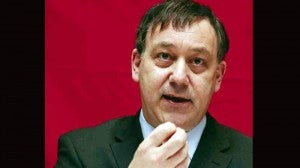 LOS ANGELES—Over the years that we’ve interviewed filmmaker Sam Raimi, he came across as an earnest, almost formal man who was always dressed in a suit with a neck or bow tie. In our recent talk with the director of three “Spider-Man” movies and the “Evil Dead” series, he surprised us by being very quotable.

It all began when Sam was asked how he cast the parts in his fantasy adventure, “Oz The Great and Powerful.”

“I was looking for the best actor or actress for the role,” said the boyish-looking director with tousled hair. “The basis for me is what actor, even if he’s not the best, has the essence of that character—and one who can really bring that character to life.

“With Michelle Williams, we have to believe she truly is a good soul,” Sam said of the actress who plays Glinda, the Good Witch. “The audience is smart. You can’t fake that—so, that ruled out most of the actresses in Hollywood.”

He explained, “What I had to do was find somebody who, when the camera got in close, they wouldn’t say, ‘That’s not a good person.’ Now, Michelle had to play the part. But, the soul was true.”

The Michigan native next talked about James Franco, who portrays the title role, Oscar “Oz” Diggs, the wizard. “I’ve worked with James for about 12 years in the ‘Spider-Man’ pictures, where he played the villain,” he began. “When I first met James, he was a little selfish—an actor who was 21 years old, a little full of himself. He was a womanizer. But, as the years went on, I saw James grow up.”

“I saw James’ generosity with the other actors come out,” added Sam. “I saw goodness, and I saw his soul mature. I saw a sweeter, kinder, gentler, more giving side as he reached his late 20s. Because I’d been with him in those 10 years, I thought to myself, ‘I don’t know if James is going to like that I know about his darker qualities. But, I know they exist in him, and I’ve seen him outgrow them. He actually has in his history everything I need for this character to take this journey.’ That’s why I thought he was right for the role.”

“With Rachel Weisz, who plays Evanora, I needed to believe that she could rule that city,” remarked the director who will do a remake of “Poltergeist.” “When we come in, we think Evanora is just an interim ruler until the next wizard comes along. But, what we really find out is that she’s a wicked witch who wants that power. So, I had to believe she could rule.”

Sam continued, “Oftentimes, I see movies where there’s a district attorney, and I don’t believe her. She doesn’t command. Rachel has that command. She’s a great actress, which I also needed. That was the quality I needed in someone playing my villain—somebody who could rule and I could fear.”

“With Theodora (the young witch), I needed someone you could believe was innocent,” Sam said. “She could have been seduced by the Wizard and had her heart broken. So, it had to be a younger actress. But, then she also had to have the other side of the coin—she had to be someone who could get angry at having her heart broken, with darkness in her that she kept bottled up, and someone who wasn’t afraid to let it loose. I thought Mila (Kunis) had that in spades.”

Complimented on how candid he was about his cast, Sam smiled and quipped, “Don’t tell the actors.”

Since “Oz” is about three strong women, Sam was asked about the women in his life whose strengths he admires. He answered, “Well, the strong woman in my life is my mother, Celia. The character that’s most like her is Evanora. Because Evanora knows she’s wicked and she loves it. And that’s just like my mom.”