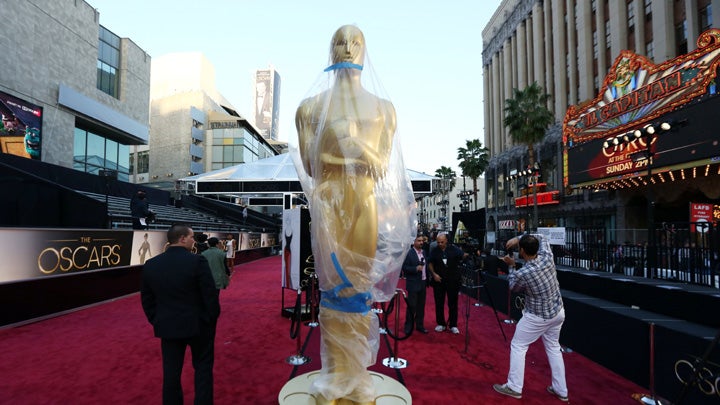 A statue in the likeness of an Oscar award is displayed on the red carpet for the 85th Academy Awards in Los Angeles, Saturday, Feb. 23, 2013. The Academy Awards are scheduled for Sunday, Feb. 24, 2013. Photo by Matt Sayles/Invision/AP

Hollywood – Hollywood hit the red carpet Sunday for the Oscars, with Ben Affleck’s Iran hostage drama “Argo” bidding to edge out Steven Spielberg’s “Lincoln” in one of the most open races in years.

The Californian sun sparkled on golden Oscar statuettes lining the way as the A-list fashion parade got underway ahead of the 85th Academy Awards, the climax of Hollywood’s awards season.

Among the first down the Dolby Theatre runway was Jessica Chastain, nominated for best actress for Osama bin Laden manhunt movie “Zero Dark Thirty,” who played down her hopes for the evening.

“I really hope it comes through and he wins,” he told broadcaster E!.

In a heavily musical show, British songstress Adele was to sing 007 theme “Skyfall” as part of a segment feting 50 years of Bond films – and legendary diva Barbra Streisand will give her first Oscars performance for 36 years.

Affleck— who would be the first person to win best picture without being nominated as director since “Driving Miss Daisy” in 1990 – got a diplomatic boost Saturday when new US Secretary of State John Kerry tweeted best wishes.

“Good luck @BenAffleck and #Argo at the Oscars. Nice seeing @StateDept & our Foreign Service on the big screen.-JK,” wrote Kerry, referring to the film’s plot about an audacious CIA plot which rescued six US diplomats from Tehran.

Spielberg, bidding for his first best picture Oscar since “Schindler’s List” in 1994, tops the nominations with 12 nods for “Lincoln” – but “Argo” has cleaned up in Hollywood’s awards season so far, despite having only seven.

Although he started the season two months ago as the favorite, Spielberg may have to settle Sunday for the best director award — one that Affleck cannot beat him to, having not been nominated in the category, in a perceived snub.

One near-certainty is that “Lincoln” star Daniel Day-Lewis will be named best actor, a record third for the British-Irish actor after wins in 1990 for “My Left Foot” and in 2008 for “There Will Be Blood.”

For best actress, the early favorite was Chastain, but the clever money is now on Jennifer Lawrence for her turn in “Silver Linings Playbook.”

The best supporting actress race is more open, although Anne Hathaway is probably still the frontrunner for her heart-wrenching turn in “Les Miserables,” which is also nominated for best picture.

The most unpredictable race of all is perhaps for best supporting actor, with Hollywood legend Robert De Niro tipped by some for playing Cooper’s father in “Silver Linings Playbook.”

On the foreign front, the clear frontrunner is “Amour,” which won the Palme d’Or at last year’s Cannes Film Festival for its heart-wrenching portrayal of an elderly couple coping with encroaching physical and mental illness.

The best animated feature contest is widely seen as a battle between Scottish-themed princess adventure “Brave” and “Wreck-It Ralph,” about a video game villain fed up with being the bad guy.

On the eve of the Oscars, “Silver Linings Playbook” got a publicity boost Saturday when it was named best film at the Independent Spirit Awards, as well as winning the best actress and best director prizes.

In a more dubious honor, the anti-Oscar Golden Raspberries, or Razzies, gave seven of their 10 prizes to the last installment of the “Twilight” franchise, including worst film, worst director and worst actress for Kristen Stewart.

Sunday’s show was to be hosted by “Family Guy” creator Seth MacFarlane, an edgier choice seen as part of a strategy to appeal to younger audiences. His potty-mouthed teddy bear creation “Ted” will make an Oscars appearance.

“Ready, Seth, Go,” said a huge poster above the closed-off section of Hollywood Boulevard, transformed into a vast red carpet for the parade ahead of Sunday evening’s show.