Awards night itself worthy of an Oscar 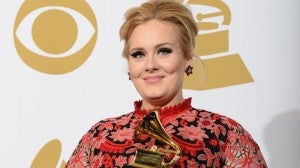 Adele poses with her trophy for Best Pop Solo Performance for “Set Fire To The Rain” in the press room at the Staples Center during the 55th Grammy Awards in Los Angeles, California, February 10, 2013. AFP/ ROBYN BECK

HOLLYWOOD—The awards show could well be an Oscars contender.

From winners sobbing uncontrollably to shocking political outbursts, bizarre snubs and streakers, the Academy Awards have seen it all.

The raw emotion and surprise events, in what remains a tightly choreographed extravaganza, are also what makes Oscars night memorable.

With a global television audience in the hundreds of millions, the temptation to use the event as a platform for political statements has proved irresistible for past winners, from Marlon Brando to Michael Moore.

Boos rang out around Kodak Theater in 2003 when maverick filmmaker Moore launched a vitriolic attack on then US President George W. Bush for waging war in Iraq.

But Moore was only following the tradition of turning the winners’ podium into a bully pulpit.

Arguably, the most famous example came in 1973, when a woman calling herself Sacheen Littlefeather stood before the stunned audience to collect Brando’s best actor Oscar for “The Godfather.”

Littlefeather promptly refused to collect the award on Brando’s behalf to protest the movie industry’s treatment of Native Americans.

Four years later, Vanessa Redgrave drew gasps and boos from the Oscars faithful when she thanked the Academy for honoring her in “Julia” despite “the threats of a small bunch of Zionist hoodlums.”

Oscars presenter Paddy Chayefsky chastised her to much applause: “I am sick and tired of people exploiting the Academy Awards for the propagation of their own personal propaganda.

“I would like to suggest to Miss Redgrave that her winning an Academy Award is not a pivotal moment in history, does not require a proclamation, and a simple ‘thank you’ would have sufficed.”

Sometimes, the choice of awards recipients can stoke controversy.

The decision to grant director Elia Kazan a lifetime achievement award in 1999 divided the glitterati, with dozens of stars refusing to rise or applaud, in protest at the filmmaker’s decision to cooperate with the authorities during the 1950s communist witch-hunts.

Politics aside, Oscars night has been littered with memorable one-offs.

In 1974, a naked man invaded the stage as actor David Niven was hosting the show, prompting him to quip: “The only laugh that man will ever get in his life is by stripping … and showing his shortcomings.”

In 1999, Italian Roberto Benigni euphorically leapt from seat-back to seat-back when he won best foreign film for “Life Is Beautiful”—the same year Gwyneth Paltrow famously sobbed her way through her victory speech.

Then in 2003, actor Adrien Brody stunned viewers and superstar Halle Berry by kissing the actress passionately on the lips as she presented his best actor statuette, creating an Oscars signature moment.

Last year’s best unscripted moment probably came from the red carpet, rather than on stage, when flamboyant British actor Sacha Baron Cohen turned up as the star of his then film “The Dictator,” ignoring Academy requests not to do so.

Holding a golden urn purportedly containing the ashes of late North Korean leader Kim Jong-il as he was interviewed live, he proceeded to “accidentally” pour them down the front of visibly irritated celebrity host Ryan Seacrest.

And this year? The best moments are unpredictable, but a gambler might suggest being ready with the bleep button for potty-mouthed teddy bear Ted, who will join his creator and Oscars host Seth MacFarlane on stage.

British songstress Adele, who will sing the 007 theme tune “Skyfall,” also has a history of off-the-cuff remarks requiring some deft intervention to spare a family audience’s sensibilities.

Asked at the Grammys earlier this month how she felt about the prospect of singing to Hollywood’s finest and hundreds of millions watching live around the world, she answered, with characteristic frankness: “I’m sh**ting myself.”