On Thursday night, when couples were supposedly out on romantic dates, “American Idol” Season 11 finalists Jessica Sanchez and Colton 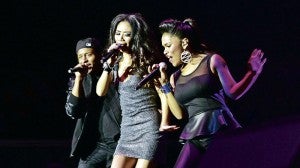 TAKING it to town with the backup singers photo:OVATION PRODUCTIONS

Jessica and Colton sang only a total of  20 songs. But to their shrieking fans (even to the more composed but likewise appreciative patrons nearest the stage), that was more than enough. The duo provided enough vocal fireworks to light up the coliseum.

Colton’s fan demographic was identifiable— awestruck young girls who occupied half of the venue.

When they screamed, he screamed back: “’Cause everything is noise, everything is screaming out, everything has come alive!” He was outfitted in his signature style—skinny jeans, black blazer. His face, at once boyish and rugged, was crowned by a blonde-black mohawk. 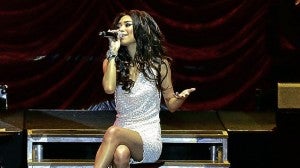 WHEN she sat perfectly still as she sang, she wielded magic.

Seating himself down at the keyboards, Colton followed up his opening number with another original Christian ballad, “You Are.” He made sure the message came across clearly: He would not become another rock god; he would be happy just being a “messenger” of the good news.

He performed three more numbers—a cover of mainstream rock band Lifehouse’s “Everything” and, again, two originals: “Rise” and “Never Gone.” Then it was time to turn the stage over to the main performer.

The loudest rounds of applause (and, before the night was over, two standing ovations) were reserved for Jessica, Fil-Am vocal juggernaut. Cleverly, she had matched those formidable chops with a smashing look—big hair, silver minidress, four-inch sequined stilettos. She quickly rose above the din of howling and rumbling applause with a warm-up performance of Frankie Valli and The Four Seasons’ “Can’t Take My Eyes Off of You.”

The buildup to the “big songs” came via the Michael Jackson classic, “Human Nature,” with backup vocalists Blair Perkins and Ariel Sprague. Then Jessica took it a notch higher with Beyonce’s “Love on Top.” The roar of audience approval was almost palpable. 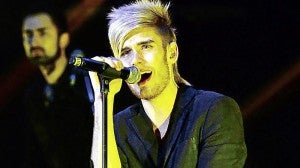 COLTON Dixon happy to be the bearer of good news, set to rock music OVATION PRODUCTIONS

When the crowd was all prepped, Jessica proceeded to perform an upbeat version of the late Amy Winehouse’s “Valerie,” taking her voice to otherwise uncomfortable depths. But the number also revealed the area she needs to work on: Singing while dancing. Well, she’s only 17.

It was when Jessica stood (or sat) perfectly still that the real magic of her voice grabbed us by the heart and took us to that special place. This was most distinct when she rendered the moving “Someone Like You” by Adele. The final verse, “Don’t forget me, I begged, I remember you said…” perfectly captured an imploring, whimpering Adele, if younger, and much lighter.

The anticipated duet with Colton, a double take of Rihanna’s “Love the Way You Lie” (without the rapping) could have been the top of the night, if not for the ultimate surprise that Jessica pulled off with her next number—a full Filipino version of the Sharon Cuneta hit, “Ikaw.” The place erupted even before Jessica could complete the first line. And by the time the last line, “… ang mahalin ay ikaw,” gently flowed out of her lips, the audience was on its feet.

She sustained the audience’s high by next taking on Whitney Houston’s immortal “I Will Always Love You,” lending an  eerie semblance to the original. It was the night’s second best applauded number.

The Luther Vandross original “Dance With My Father” provided Jessica another opportunity to show emotion beyond her years. When, perched on a high chair, she dedicated the song to her dad Gilbert, her sincerity was utterly believable.

Her next three songs—Etta James’ “Steal Away,” Deborah Cox’s “Nobody’s Supposed to Be Here,” and Jennifer Holliday’s “And I am Telling You”—showcased more of the teener’s advanced vocal skills, marked by techniques traditionally identified with the most seasoned singers. 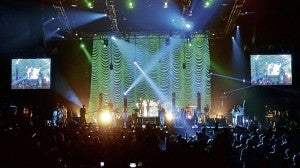 EVEN the “conservative” patron section came alive when Jessica hit the big notes.

As a glimpse into her own brand of music, Jessica treated the concert-goers to a single from her coming album. The song, “Fairytale,” generated an upbeat mood that moved the singer to dance.

Jessica ended the show by performing concert sponsor Smart’s anthem “Jump In,” complete with a dance crew and a line of white-shirted youths waving to the crowd. It was, without doubt, the liveliest number of the show. Even the conservative patron section came alive, with people rising to their feet to dance, rhythmically pumping their fists up and down.

That night, any set of “Idol” judges would have given Jessica a standing ovation, too.